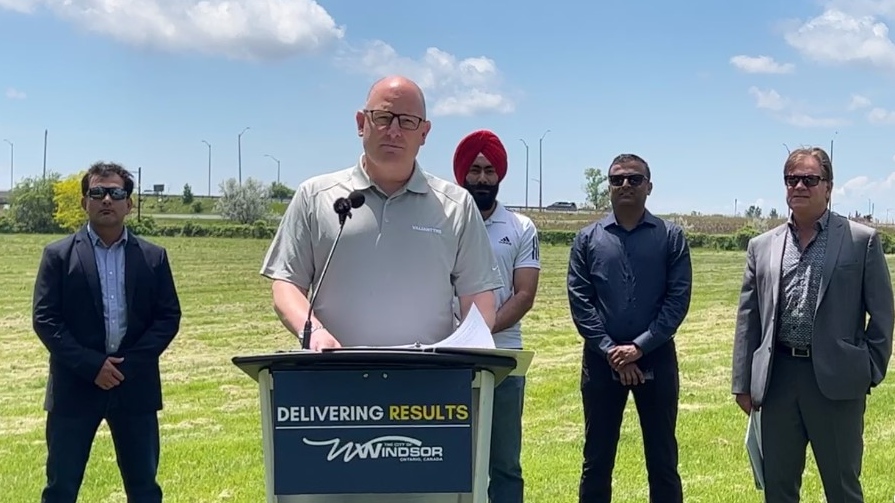 Plans are in the works to install Windsor’s first full-size cricket pitch and to improve multi-use trails at a popular community park.

Windsor city council has committed $100,000 for a cricket field within Derwent Park, while also improving and extending nearby multi-use trails.

Windsor Mayor Drew Dilkens, Ward 8 councillor Gary Kaschak and officials with the Windsor Essex Cricket Club provided details about the plans at the park on Friday.

“Through completion of this important study at Derwent Park, enhancement of this useable space, and installation of the city’s first full-sized cricket pitch, we are delivering results for healthy and active living for residents and visitors,” said Dilkens.

Plans are in the works to install Windsor's first, full-size CRICKET PITCH at Derwent Park in Forest Glade.

About $100,000 is being invested by the city to "undertake a complete design" — and improve the park's trails.@CTVWindsor pic.twitter.com/j8kwj6tdrw

There are about 11 acres of recreational greenspace between Forest Glade Drive and the E.C. Row Expressway – running along the east side of Lauzon Parkway.

Derwent Park currently has 650 metres of gravel and natural trails that run through a woodlot along the eastern edge of city land. Combined, the woodlot, trail, and open space cover approximately 32 acres in total.

The future cricket pitch would be the first full-size pitch in the city — and Windsor's third pitch overall.

The number of teams under the Windsor Essex Cricket League has increased from five to 15, between 2018 and 2022, according to president Anwar Shahid. Windsor has just two cricket grounds, he said, which allows for a maximum of eight teams to play on any given day since one game can take between four and five hours.

"We've also had some incidents where we had to stop some clubs outside Windsor because they wanted to visit us and play some exhibition games here," said Shahid, noting there wasn't enough cricket pitches in Windsor to allow for that to happen.

"But we are happy that we can accommodate those requests now."

City administration expects to complete the full design by the end of summer and present it to council as a part of the 2023 proposed capital budget.

CTVNews.ca asked Canadians to share their travel horror stories as cancelled flights, delays and lost luggage throw a wrench in Canadians' summer travel plans, due in part to staffing shortages at Canadian airports. Some report sleeping at airports and others say it took days to get to or from a destination.

The remaining businesses on Shelbourne Street in Saanich, B.C., that had been closed after last week's shooting at a Bank of Montreal branch have now reopened, police say.

Slovyansk could become the next major target in Moscow's campaign to take the Donbas region, Ukraine's predominantly Russian-speaking industrial heartland.

It's been said no one's success is complete without failure, but a new international exhibit in Calgary is proving that even some of the most talented innovators had some of the worst ideas for consumers.

Thousands of residents in Sydney suburbs were told to evacuate their homes on Sunday after heavy rains caused floodwaters to rise and rivers to overflow in what authorities called life-threatening emergencies.

Parts of a mountain glacier collapsed in the Italian Alps on Sunday amid record temperatures, local authorities said, killing at least six people and injuring eight.