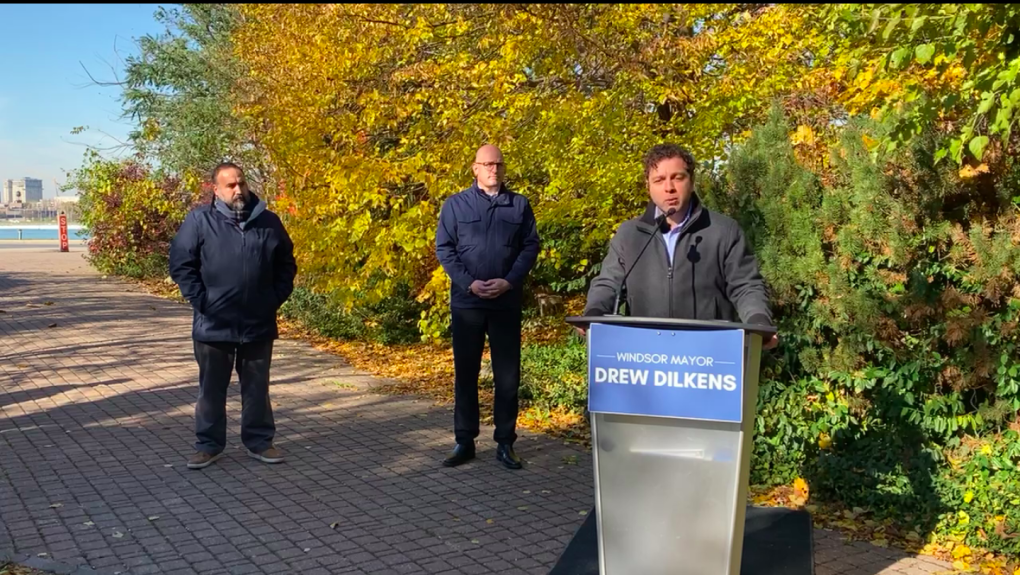 Plans are in store to clean-up and revamp Gateway Park now that the City of Windsor reached an agreement with the Detroit River Tunnel Company granting the municipality a 99-year licence to operate the park.

Windsor mayor Drew Dilkens, Ward 2 councillor Fabio Costante and Ward 3 councillor Rino Bortolin made the announcement Tuesday that the licence agreement took effect Nov. 9, 2021 which authorizes the city to take an active role in maintaining and managing the naturalized park.

“On behalf of residents, I would like to thank the Detroit River Tunnel Company for signing this historic park licence agreement granting the City of Windsor rights to manage and maintain the Gateway Park property for the next 99 years,” Dilkens said. “We are proud stewards of our city’s naturalized areas and intend to raise Gateway Park to the same high standards as all of our public parks. The revitalization of Gateway Park starts this month to make it an inviting, safe and accessible passive park for all to enjoy.”

Gateway Park is located above the CP tunnel that runs parallel to Cameron Avenue bordering the city’s west side. City officials say maintenance work by parks staff is expected to start this month to clean-up the site and raise the property’s environment “to the same high safety, accessibility and aesthetic standards as all public parks in Windsor.”

“For decades, many residents have volunteered and worked to see Gateway Park meet its potential. With this significant investment to clean up and beautify the park, we are ensuring that the park not only meets its potential but is a safe and accessible space for residents nearby and afar,” Costante said. “I am excited about adding a kilometre of parkland to our urban core for residents to enjoy for generations to come.”

The Detroit River Tunnel Company, a subsidiary of Canadian Pacific Railway, will retain ownership of the land, paying the city $300,000 to help with maintenance costs. The payment includes a one-time transfer of $100,000 followed by an annual installment of $20,000 for the next 10 years.

The city says the rail company will also pay $40,000 for easement rights to the city’s property located about 40 feet underground.

Windsor city council has committed $700,000 toward revitalizing the park as part of its $1.6 billion pledge over the next 10 years to fund capital improvements aimed at raising the quality of life for residents.

“Gateway Park has long been sought after as a connecting point for residents in the area to the riverfront from as far south as Wyandotte Street. Adding this link of parkland to our system will be key in all the redevelopment happening along the University Avenue corridor, as well as rejuvenating the neighbourhoods in the area. I am excited to have council support this investment after years of efforts by so many residents finally bringing this project to reality,” Bortolin said.

In addition to site cleanup and restoration, council’s investment will help offer the following features:

Gateway Park begins at Riverside Drive and runs about one km south to Wyandotte Street. It is about 50 to 70 metres wide and bordered on each side by an overgrowth of diverse plants and trees.

A row of Japanese cherry blossoms, donated in 2002 by the Consulate-General of Japan’s Sakura Project as a symbol of international friendship, lines a foot trail in the centre of the park.

The park’s full revitalization is expected to be completed by fall of 2022 — marking the 20th anniversary of the Sakura Project.

Here's how much more Thanksgiving dinner will cost Canadians this year

Thanksgiving dinner will come with a hefty price tag for Canadians this year, according to data compiled by Dalhousie University's Agri-Food Analytics Lab.

Jupiter will make its closest approach to Earth in 59 years on Monday, September 26, according to NASA.