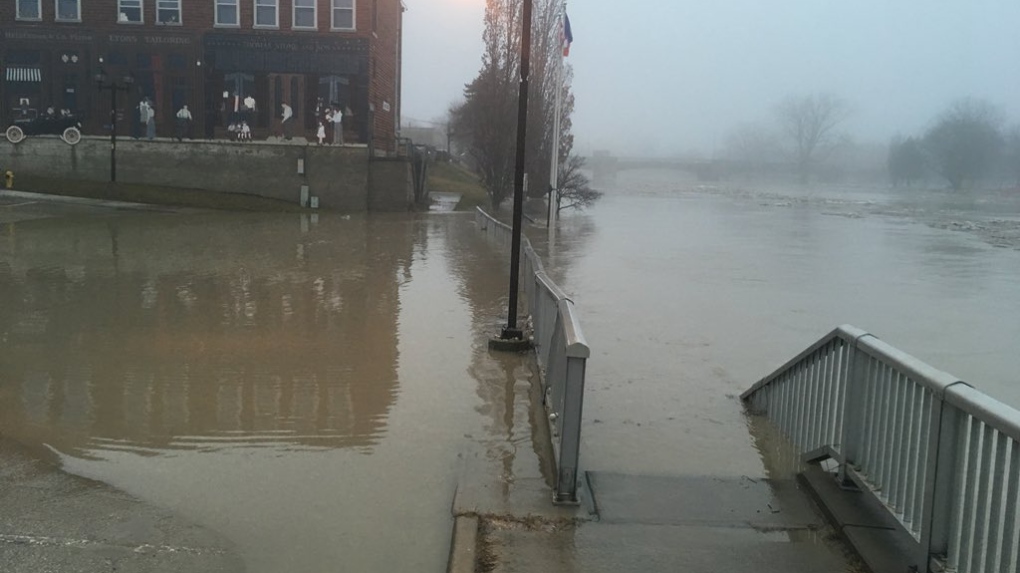 An ice jam in the Thames River caused flooding in the City of Chatham on February 7, 2019. ( Chris Campbell / CTV Windsor )

Chatham-Kent officials say repairs done to prevent leaks along the Thames River near Jeannette’s Creek appear to be holding Saturday.

The manager of infrastructure and engineering services for the municipality, Thomas Kelly, says staff and contractors worked through the night to try to ensure leaks near Poppe Road and Buchanan Line were plugged up.

They continue to monitor the situation.

Water levels have decreased by about 12 inches near the site and continue to recede slowly, officials say, but the situation remains uncertain due to an ice jam that remains just east at the mouth of the Thames at Lighthouse Cove.

“Repairs done yesterday appear to be holding so far, although the prolonged pressure on the dikes is producing seepage at the base in some areas,” Kelly said.

“We did experience a breach in one section of the dike that impacted 300 acres. This area has been contained and is now stable.”

The Lower Thames Valley Conservation Authority patrolled areas both north and south of the river all night.

The ice jam currently runs from the mouth of the river at Lighthouse Cove to one kilometer west of Prairie Siding. Channels are open near the mouth of the Thames River allowing water to flow into the lake, officials say.

There are some areas of ice build-up along Riverview Line. Public Works crews are monitoring the situation and treating with salt as required.

The localized state of emergency will remain in place until the situation has fully stabilized, officials say.

The municipality’s main phone number 519-360-1998 is being staffed until further notice for residents who have questions or concerns.