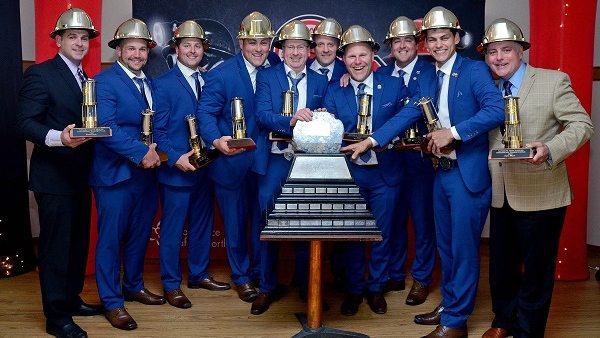 Mine rescue volunteers from K+S Windsor Salt Ojibway Mine came out on top at the 70th annual Ontario Mine Rescue Provincial Competition.

The Windsor Salt Ojibway Mine team won the Southern District mine rescue competition in Goderich in May. The team was also awarded the John Guthrie (Special Equipment) Award during the closing banquet on June 7.

Jean-Yves Doiron, a mine rescue technician with Vale Canada in Sudbury, won the award for top technician. Doiron won the Sudbury District competition in May.

The competition was organized by Ontario Mine Rescue, a part of Workplace Safety North, and hosted by Newmont Goldcorp, Red Lake Gold Mines.

During the week’s event, eight teams from across Ontario, selected in district competitions, were evaluated on their knowledge, firefighting skills, first aid response, use of emergency equipment and decision-making ability under stress in an underground simulated emergency at Newmont Goldcorp’s Red Lake Gold Mines.