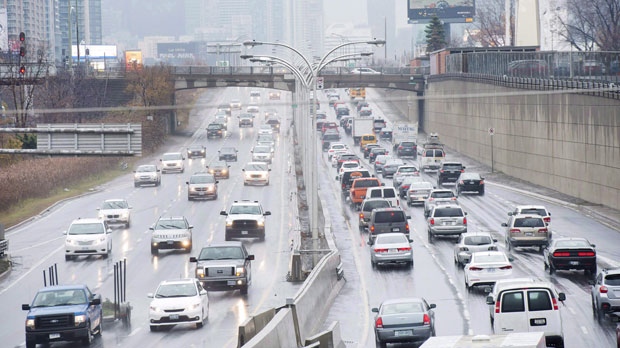 Vehicles makes there way into and out of downtown Toronto along the Gardiner Expressway in Toronto on Thursday, November 24, 2016. (THE CANADIAN PRESS/Nathan Denette)

There’s a Windsor connection to a series of class action lawsuits proposed against six Ontario auto insurers and their regulator the Financial Services Commission of Ontario.

Jennifer Bezaire, a partner at Greg Monforton & Partners in Windsor, announced Wednesday that she and her firm are members of the consortium of lawyers formed to commence the lawsuits.

“This $600-million lawsuit seeks to force these insurers to pay back HST wrongly charged to policyholders injured in car crashes,” says Bezaire, a member of the Board of Directors of the Ontario Trial Lawyers Association.

It also seeks an injunction prohibiting these insurers from continuing their practice against the direction of FSCO and case law from the License Appeal Tribunal.

Bezaire, pointing to a FSCO Bulletin which told all insurers "The HST is a tax and is not part of the benefit limits" said "FSCO could not have been clearer. But these insurers unilaterally took the position that HST should be deducted from our clients' benefits.”

Bezaire says a few weeks ago, one of the insurers (Aviva) wrote to a Windsor accident victim saying: "Aviva intends to maintain its position that any applicable HST is inclusive of the benefit limit.”

Bezaire added: "these insurers seemingly ignored FSCO and where they could they refused to pay HST or they used HST to wrongfully reduce benefits, resulting in less care for injured policyholders.”

"FSCO turned a blind eye to the unfair industry practices, even when it knew people were being unfairly denied benefits," says Bezaire.

Bezaire says this deceitful action by insurers appears widespread and our investigation of other insurers continues.

The lawyers have established a toll free hotline (1-866-540-2747) and website (autohstclassaction.com) to receive complaints from the public.