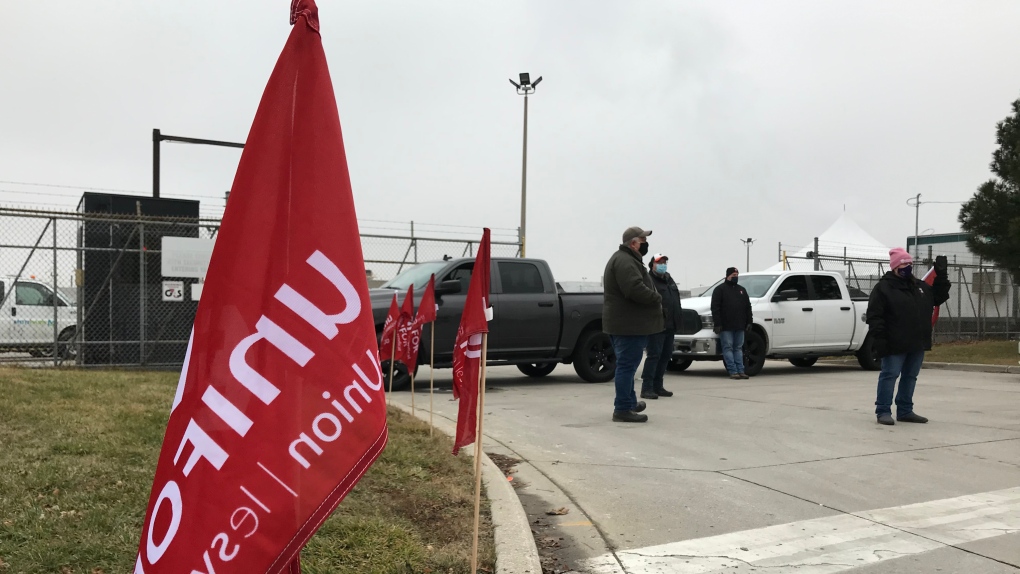 WINDSOR, ONT. -- Unifor members are barricading a lot at the Windsor Assembly Plant now that 60 members have been laid off.

“Unfortunately, the commercial contract went to another employer from AWC and Motipark won the contract through the bidding process,” says Unifor Local 444 president Dave Cassidy.

These are the companies which shuttle finished minivans to rail and transport truck to be delivered to dealers.

Unifor represents the workers at auto warehousing corporation and they believe their members have succession rights to get the new contract with Motipark.

Cassidy says they have been trying to negotiate with Motipark, but it has been unsuccessful.

“Motipark Limited is proud to have been awarded a service contract for vehicle handling work at FCA Canada’s Windsor Assembly Plant effective Jan. 1, 2021," an emailed statement from the company said. "We have our own workforce in place, represented by the Teamsters Union. Should the need arise in the future for new hires, we will be happy to consider the prior vendor's employees.”

FCA officials won’t comment on the blockade and will only confirm Motipark‘s contract started Jan.1.

“As Windsor Assembly Plant is down this week, there is no impact to production,” said LouAnn Gosselin,

head of communications with FCA Canada.

Cassidy believes the teamsters union has been awarded the contract for their work, so they are considering filing a grievance with the Ontario Labour Relations Board.

“As of Monday we go back to full production here at Windsor Assembly Plant and we never want to impede production but I’m telling you, we are not opening this gate, nobody is coming and nobody is going out until we get a resolve on this situation,” says Cassidy.