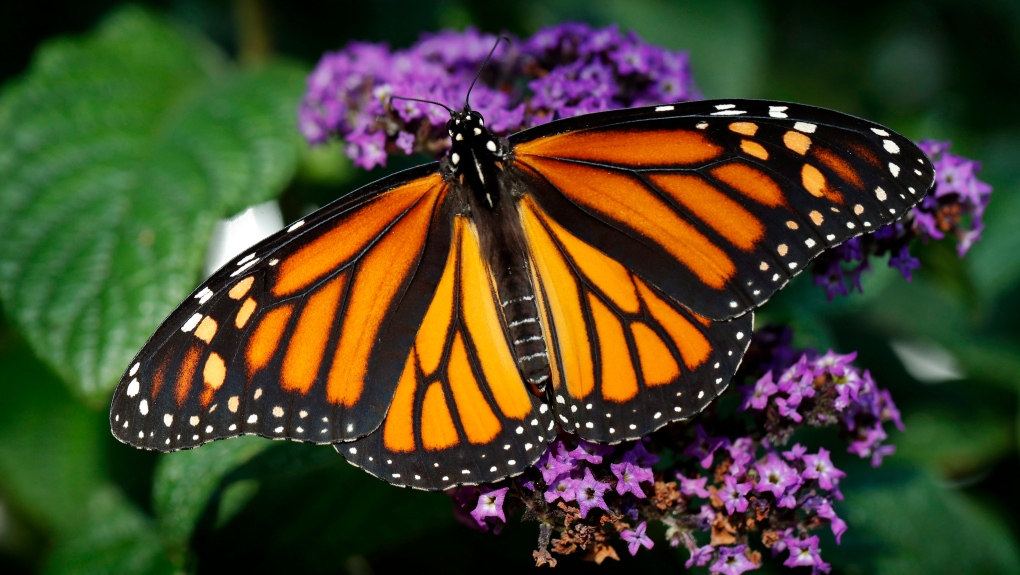 In this Sept. 17, 2018 file photo, a monarch butterfly rests on a flower in Urbandale, Iowa. (THE CANADIAN PRESS/AP/Charlie Neibergall)

One of nature's greatest migrations may be returning to health after a stunning growth in the number of monarch butterflies that fluttered across North America last year.

But if populations of the striking black-and-orange aviators are starting to recover, it's no thanks to Canada, said Carolyn Callaghan of the Canadian Wildlife Federation.

Every year, the main population of monarchs numbering in the tens of millions migrates between Canada and the United States to overwinter in Mexico. That's a journey of more than 5,000 kilometres undertaken by tiny creatures weighing less than a gram.

In recent years, the number of monarchs making the flight plummeted by about 90 per cent from historic numbers, Callaghan said.

Scientists estimate monarch numbers by measuring a tiny patch of central Mexican forest where they congregate. There can be anywhere from 10 million to 50 million monarchs per hectare.

As recently as 1993, the butterflies took up 6.2 hectares. Last year, the size of forest where scientists could find them was down to 2.5 hectares.

Something, though, seems to have gone very right since then.

A newly released survey for 2018 found monarchs on more than six hectares of forest, which would suggest population numbers were up 144 per cent since 2017. One year's increase is not necessarily a trend, but it's good news.

"It's a reprieve from a dire situation," said Campbell.

In addition to good weather -- the previous year's butterflies had been pummelled by tropical storms and tornadoes -- a three-country agreement to bring back the monarch may finally be paying off, she said.

Mexico has cracked down on illegal logging that destroyed monarch habitat and is working to create eco-tourism opportunities as a replacement. The U.S. has engaged in extensive replantings of the weeds and wild flowers monarchs need for nectar and egg-laying.

"I'm astounded at what they've been able to do," said Campbell. "The state of Ohio alone has restored more than (32,000 hectares) of habitat."

Much of that has consisted simply of planting milkweed and wild flowers along highway meridians, power corridors or other unused plots of land.

Southern Canada, especially Ontario and Quebec, contains important monarch breeding grounds. About one-third of the butterflies that show up in Mexico have been found to have originated in Canada or the northern states.

The Americans and the Mexicans have far surpassed Canadian efforts to restore habitat, Callaghan said. That's despite an agreement signed in 2016 between the leaders of the three countries to address habitat loss across breeding and migrating habitat.

"We have a role to play," Callaghan said. "We have yet to do this."

The butterflies are considered endangered but are not yet protected under the Species at Risk Act.

Efforts to improve monarch habitat in several national parks are underway. The Ontario power utility Hydro One and the National Capital Commission are on board, said Callaghan.

Canada could be doing more, she said.

"The U.S. has had a huge lead on us. Every (state) department of transportation is taking on restoration, mowing less, planting native flowers.