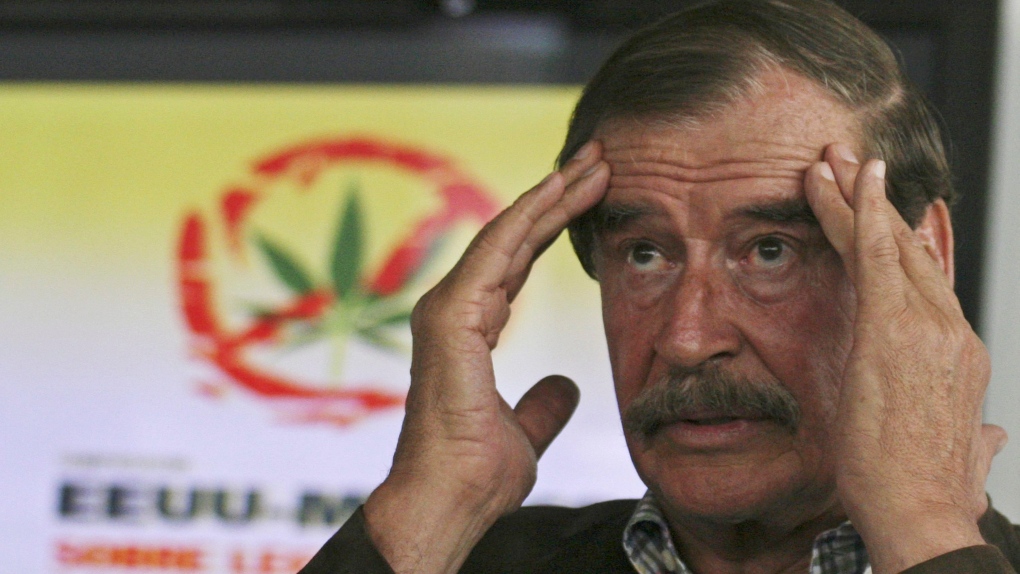 File - In this July 18, 2013, file photo, Mexico's former president Vicente Fox speaks during a news conference on the first day of the U.S.-Mexico Symposium on Legalization and Medical Use of Cannabis in San Francisco del Rincon, Mexico. (AP Photo/Mario Armas, File)

MONTREAL -- President Donald Trump is blackmailing Canada, Mexico and asylum seekers in order to exert maximum pressure to reach a new NAFTA deal that is favourable to the United States and to get funding for his border wall, former Mexican president Vicente Fox said Wednesday.

"In the case of Mexico, the blackmail is the wall. He wants the wall and maybe he will grant NAFTA," Fox said in an interview from Mexico City.

The outspoken ex-politician has nothing good to say about the U.S. president, whom he describes as ignorant, bigoted and dangerous.

Fox said Trump's racist comments about Mexicans being rapists and criminals and complaints about illegal immigration belie the fact that NAFTA has done its job in stemming the flow of people crossing the border.

Canada and Mexico have to remain firmly united rather than give in to Trump's demands for bilateral agreements with its two North American neighbours, he said.

"I don't see the advantage of going bilateral," he said, adding that trade for Trump is a zero-sum game, in which he wins and others lose.

"So whatever formula, whether bilateral or trilateral or whatever other formula, it will never work if he insists that the United States has to have a surplus and we have to have a deficit."

Countries like Canada that believe in globalization and entrepreneurship need to stand up against Trump's bullying behaviour, he said, criticizing the president for verbally attacking Prime Minister Justin Trudeau for his post-G7 meeting statement that Canada won't be pushed around.

"He's a great prime minister doing a great job and this crazy horse, this crazy guy Trump doesn't have the right to attack him the way he did."

Fox said he hopes the U.S. Democratic Party will make progress in November's mid-term elections so Trump "can be bridled."

"Otherwise, we are all going to be paying a high price."

Canada and Mexico have both announced retaliatory tariffs after the United States imposed tariffs on steel and aluminum on them and a host of other countries.

Fox said Mexico can also buy soybeans, yellow corn and dairy products from Brazil, Argentina and other countries to exert pressure on millions of U.S. farmers.

Trump's threatened tariffs on auto sector imports into the U.S. will raise prices for American consumers but, Fox said, won't destroy Mexico because the country has developed a solid consumer market and can also shift exports to South America.

American trade actions will only further drive countries into the trading orbit of China, which is increasing its business relationships in Latin America, Fox added.

"China is ready to get in love with Latin America," he said, adding that 1,000 Chinese business leaders are scheduled to meet next spring to drive up business in Mexico.

The U.S. accounts for 20 per cent of the global economy but China is poised to overtake it as the world's largest economy.

He said Americans need to stand up to oppose Trump's leadership.

"Either they resist and repeal and change things or the United States will lose any remaining moral authority that they could have today by this stupid guy they have as president."

Fox spoke to The Canadian Press after it was announced he will join the board of Knowledgehook, a Waterloo, Ont.-based company whose platform analyzes the academic performance of math students in real-time to identify the best-practice teaching solutions to educators.

The former president said that he hopes to use Knowledgehook to help Mexico's education system, which had a high school graduation rate of 45 per cent. The platform will be implemented into Centro Fox Library in Mexico.