“We couldn’t believe that we got it,” says science teacher Chuck Stoffle.

He applied for the School Tech Grant a few months ago, and then forgot about it.

Hetherington is one of 23 schools in Canada, 13 of which are elementary, to be a recipient of the grant.

“Since the robots that we have are very high quality and expensive, it granted us seven new robot kits,” says Zoie Arcand, a grade 8 student and member of the robotics team.

“At the start of this year, we only had three robots to work with, which was difficult working with 10 people who are all working on different programs,” says Arcand.

Now, they have enough for everyone to work on their own robot, and three new laptops from which to program them.

“You do block coding and the bigger screen that you can use, the more of the code you can see,” says Stoffle. 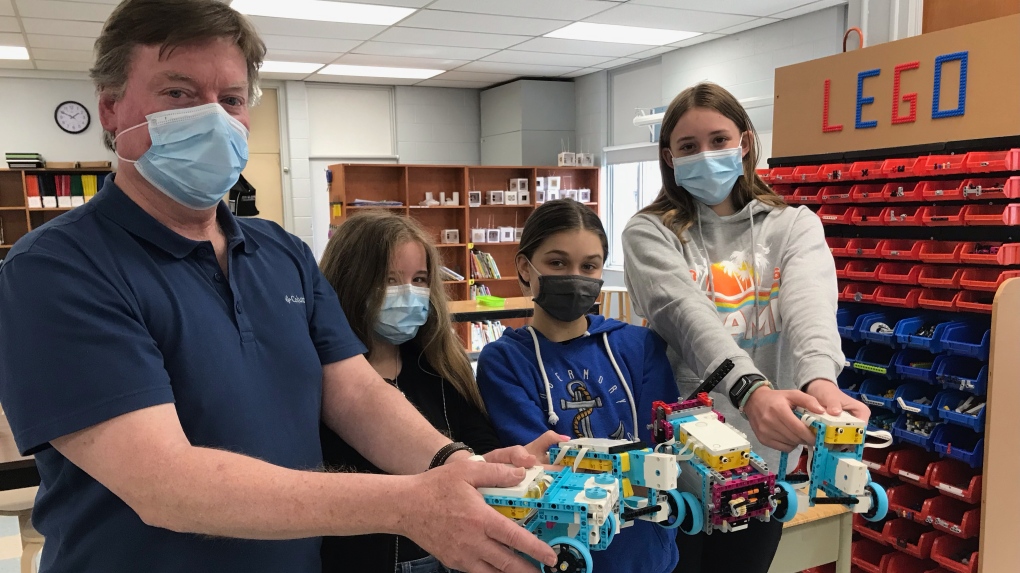 The Lego robotics team from Hetherington Elementary School show some of the new gadgets they bought after receiving a grant from Best Buy in Windsor, Ont. on Tuesday, March 22, 2022. (Michelle Maluske/CTV Windsor)

The Hetherington team made it to the provincial championships for Lego robotics this school year, which was held virtually.

“For a school our size, 400 kids, to be able to reach the provincials, after three years as a team, I think it’s quite an accomplishment,” says Stoffle.

“It was definitely a little bit nerve-wracking but being online and not live is definitely a bit more calm for me,” says Martinello.

“I definitely enjoy it,” says Annika Konopaski. “I think I've gotten much better than when I first joined.”

And the grade 8 student also believes the skills she learned in robotics will help in her adult life.

“As the world progresses there will be more job opportunities with programming, so it'll be a very essential skill in the future,” says Konopaski.

Because of the pandemic, the team is made up of one grade 8 cohort, and they worked virtually for most of the year.

Now that restrictions are easing, the entire team tells CTV News they’re excited to recruit younger students to the program.