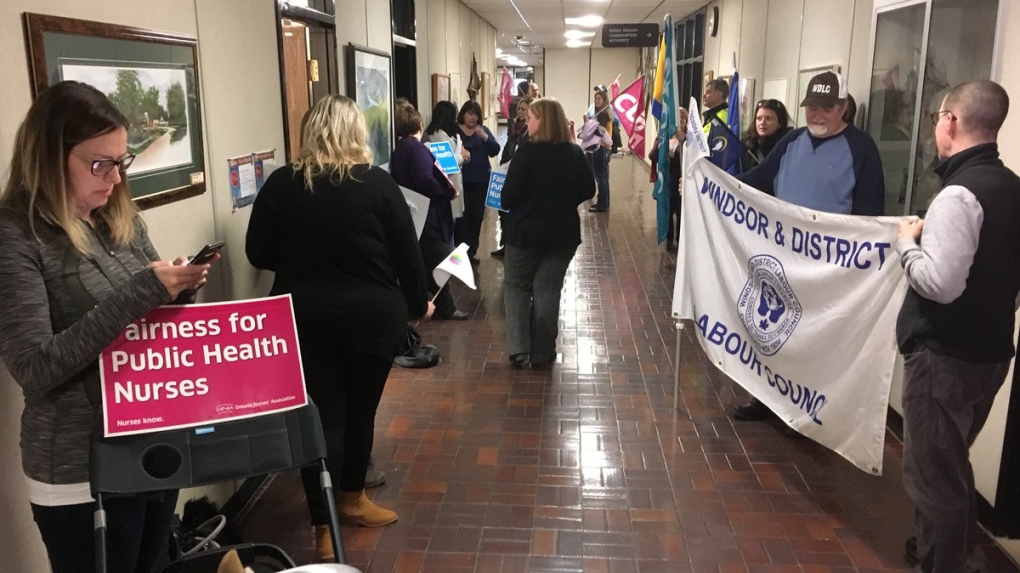 More than a dozen people picket outside of the health unit board meeting on February 28, 2019. ( Chris Campbell / CTV Windsor )

More than 80 public health nurses at the Windsor-Essex County Health Unit are on the verge of a strike.

The members of the Ontario Nurses Association were presented with a final offer from the health unit during a mediation meeting on Thursday.

The ONA said in a statement that the meeting did not go well.

More than a dozen people picketed outside of the health unit board meeting on Thursday afternoon.

Barb Deter of the nurses bargaining team tells CTV Windsor they are not happy with the offer.

“We're disappointed, very disappointed in that final offer that they've given us,” says Deter. “All we wanted was a fair collective agreement. We did not achieve that.”

Details of the offer are not being publicly released.

The 86 nurse practioners, registered practical nurses and public health nurses have been working without a contract since March 31, 2018.

Deter says they will vote on the offer on Thursday March 7, and the nurses could be on strike or locked out on March 8 at 12:01 a.m. if a deal is not reached.

The ONA said the nurses struggle with that because of their "unwavering commitment to their clients.”

The nurses are responsible for a number of different programs, from school vaccinations to injury prevention.

The main issue in the negotiations is money, but the union says it’s a larger issue.

The ONA says “the pay disparity between male-dominated professions like police and firefighters and the female-dominated nursing profession is enormous and growing, clearly making the dispute a gender-based issue.”

The union wants the health unit management team to return to the bargaining table to negotiate “a fair collective agreement for nurses before next Thursday to avoid a strike.