WINDSOR, ONT. -- The COVID-19 pandemic hasn’t stopped a couple from holding a unique gender reveal party that lit up the Detroit skyline.

Brett Stowell, of Detroit, had the bright idea to light up a few buildings in Detroit, either pink or blue.

Bedrock Detroit, a commercial real-estate firm jumped on board.

"They emailed me back and said we would love to help you guys out,” said Brett.

On Sunday, at 7 p.m. the Ally Detroit Centre and One Woodward Avenue lit up in pink. 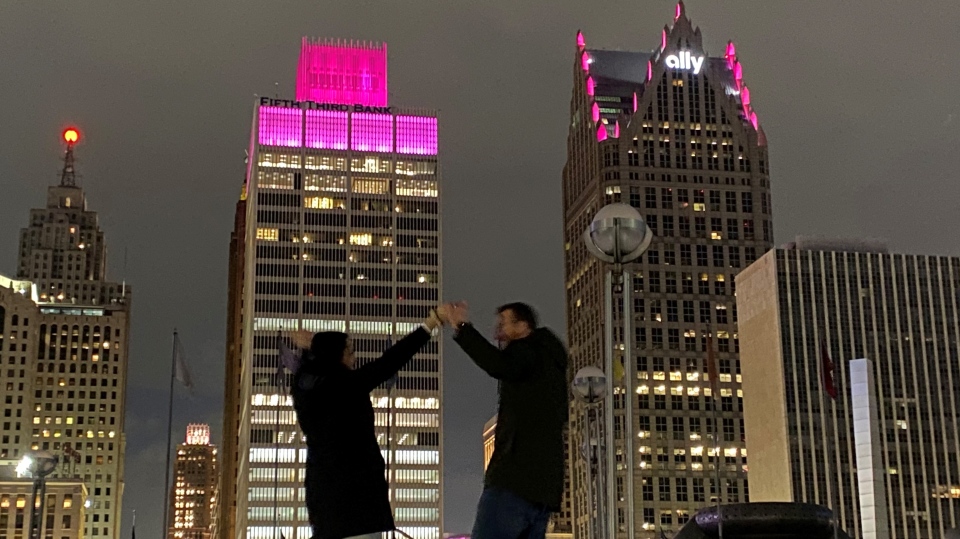 "We had flashlights. People over there had binoculars. We could see one another. It was pretty cool," said Alecia. “It was really the cheers that put me over the edge…I started crying. It just felt really nice to know all the support and love there was for us.”

The couple met online one-and-a-half years before the pandemic hit the region.

They were separated for five months.

On Alecia’s 32nd birthday, she took a flight to Detroit to spend the week with Brett.

He proposed to her on a hot air balloon.

"She's ends up taking the blindfold off and there I was on one knee," explained Brett.

An immigration lawyer advised them to stay together in the United States if they had intentions of marriage.

"My family had to completely take over my apartment. They emptied it out," she said.

"We did it under a willow tree where her family can be right across the river with binoculars,” said Brett. “That was awesome!”

The Stowell’s say they are grateful for the Facebook Group called “Advocacy for Family Reunification at the Canadian Border.” Here you can communication with others facing similar challenges.