Cat recovering after being caught in trap in Amherstburg, Ont. 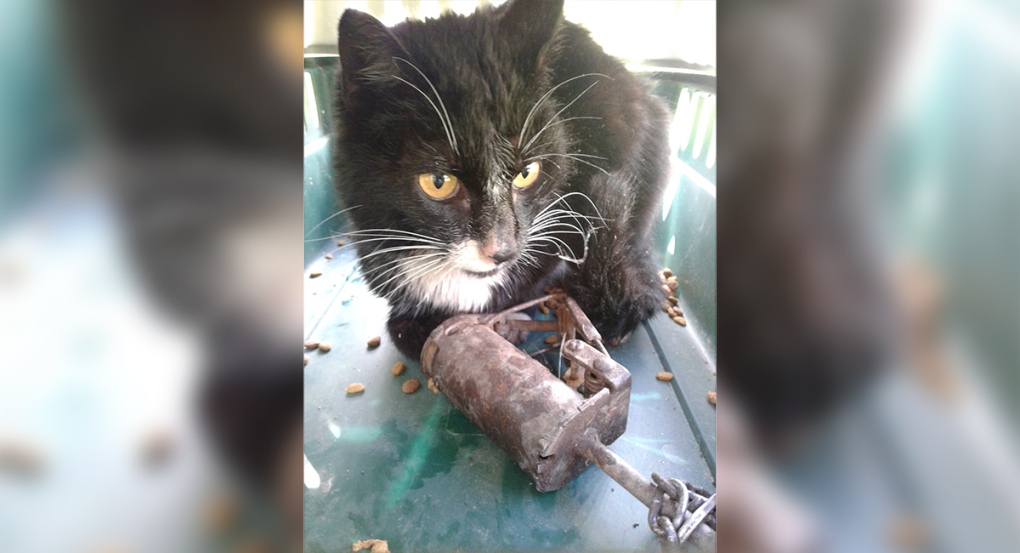 'Bubba Gumption' is seen with his paw caught in a trap. (Source: Windsor/Essex County Humane Society)

WINDSOR, ONT. -- A cat discovered in an Amherstburg neighbourhood dragging a cuff-style trap may lose his leg.

The executive director of the Windsor/Essex County Humane Society said the paw of the male cat, named Bubba Gumption, was essentially crushed.

“He came in emaciated and dehydrated,” said Melanie Counter.

The maimed cat was discovered in the backyard of a residence in Malden Centre on Sunday.

It was then brought to Wings Rehab where the trap was removed, and transported to the humane society the following day.

Coulter believes at some point the cat was a pet as it was neutered and she put the age at around 10 years old.

“We posted an image of the cat up on our Facebook page but so far no one has claimed the cat,” she added.

The story has angered some animal rights groups, as they continue to appeal to the public not use traps.

“These traps are designed to hold an animal against their will, and do so with brutal efficacy,” says Michael Howie, spokesperson for The Fur-Bearers

While the trap is legal in the province, Howie added anyone who believed the trap was set unlawfully should contact the Ministry of Natural Resources and Forestry on its tips line at 1-877-847-7677 or on the web at Ontario.ca.

Coulter pointed out the story is a good reminder there are more humane ways to deal with raccoons and there is great information in terms of handling any conflict.

Bubba continues to receive care at the shelter in hopes of saving the leg, but Coulter remained confident the cat would make a full physical recovery for an eventual adoption.

Bubba Gumption has been though a LOT. He was found with his leg stuck in a trap, and the kind person who found him...