42 arrests, 37 vehicle seizures made by police in Windsor protest

42 arrests, 37 vehicle seizures made by police in Windsor protest

Windsor police say there have been 42 arrests and 37 seized vehicles since the onset of the protest near the Ambassador Bridge.

Police say a significant amount of the arrests were as a result of enforcement actions over the last two days. Windsor Mayor Drew Dilkens has signed emergency declaration to help with aftermath.

Mizuno said the outcome was relatively peaceful, with public safety being a top priority.

Enforcement escalated after a court injunction was granted on Friday to remove the protesters blocking the border. Over the weekend, Windsor police had support from OPP and officers from other jurisdictions. 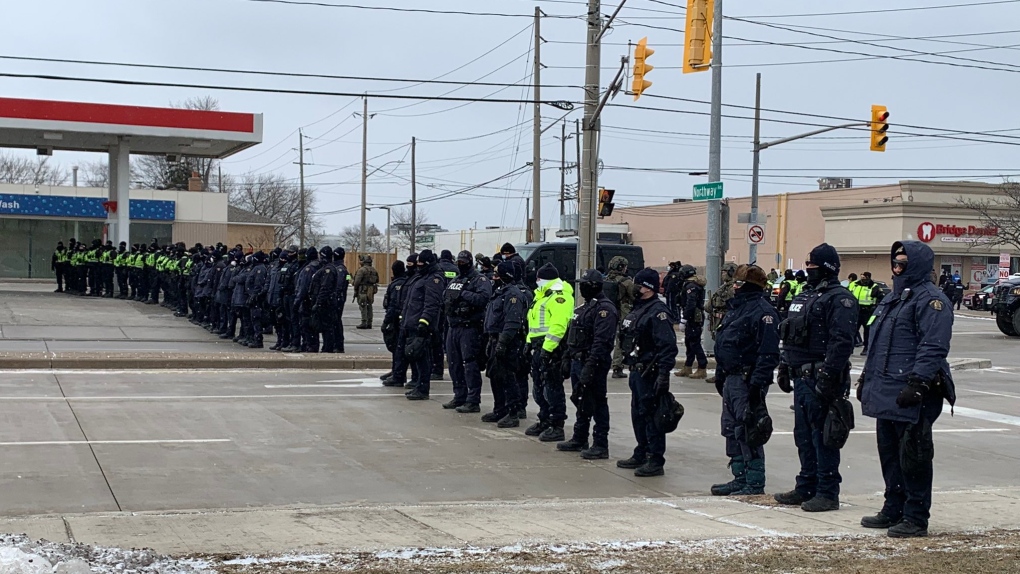 Police enforcement continues to escalate as several arrests are made near the Ambassador Bridge in Windsor, Ont., on Sunday, Feb. 13, 2022. (Chris Campbell / CTV Windsor)

“The large majority of persons arrested have since been released with a future court date and are facing a charge of mischief. Some are also facing a charge of disobeying a court order, section CC 127(1),” said a statement from police.

Police say individuals facing charges were also released with conditions, which may include not being allowed to attend specific areas of the City of Windsor.

Mizuno said there is currently there is a traffic structure in place to help ensure it doesn’t happen again.

“We understand the impact the traffic has on community,” she added.

Deputy Chief Jason Bellaire says the border point is critical to the local economy so they are making sure that they take the appropriate steps to fully reopen the roads.

“We came to a conclusion that we were happy with,” says Bellaire.

Dilkens thanked police for their efforts.

“We’re extremely supportive for the on the ground support that was provided,” says Dilkens.

He said they have demonstrators out there today that are following the rules. The goal is to maintain open roadways and public safety.

Police enforcement continues to escalate as several arrests are made near the Ambassador Bridge in Windsor, Ont., on Sunday, Feb. 13, 2022. (Chris Campbell / CTV Windsor)

Russia rejects $60-a-barrel cap on its oil, warns of cutoffs