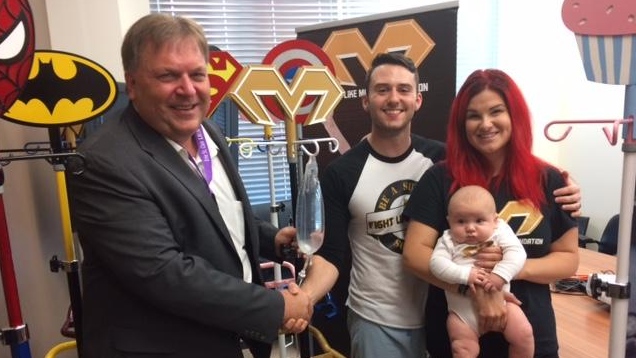 Mason Macri continues to give back to the Windsor-Essex community.

Mason’s parents, Iain Macri and Chantelle Bacon, presented 20 ‘Superhero’ IV poles to LHIN officials on Monday.  The medical poles have been modified by Klassen Custom Fab and SES Powder Coating to include toppers that feature Batman, Spiderman and other logos.

The idea was inspired by the couple’s four-year-old son Mason, who loved superheroes. Mason passed away from cancer in June 2016.

Mason’s parents say they wanted to help other children who dreaded being hooked up to an IV.

“His medical equipment, including his IV pole, made him feel uncomfortable” says Iain Macri.” So we thought, why can’t we have something cool? Knowing his love for superheroes, we customized his IV pole and made it something he could brag about to his visitors.”

The superhero poles will be available to children who are LHIN patients in Windsor-Essex with needs including IV therapy, IV antibiotics, chemotherapy, hydration and tube feeds.

“We hope these customized IV poles help these kids feel proud about their fight and give them that superhero strength they need,” says Macri.

Erie St. Clair LHIN CEO Ralph Ganter says he is thrilled with the donation and hopes more IV poles will be made available across the region.

“We have all been touched by Mason’s story and his bravery, so we are honoured to partner with the Fight Like Mason Foundation to provide these young superheroes with their own customized IV pole” says Ganter.

“There’s no greater honour to Mason than carrying on his legacy through initiatives like this,” adds Macri. “It’s important for us now that we’ve had this heartbreaking experience, to help other families going through similar situations.”