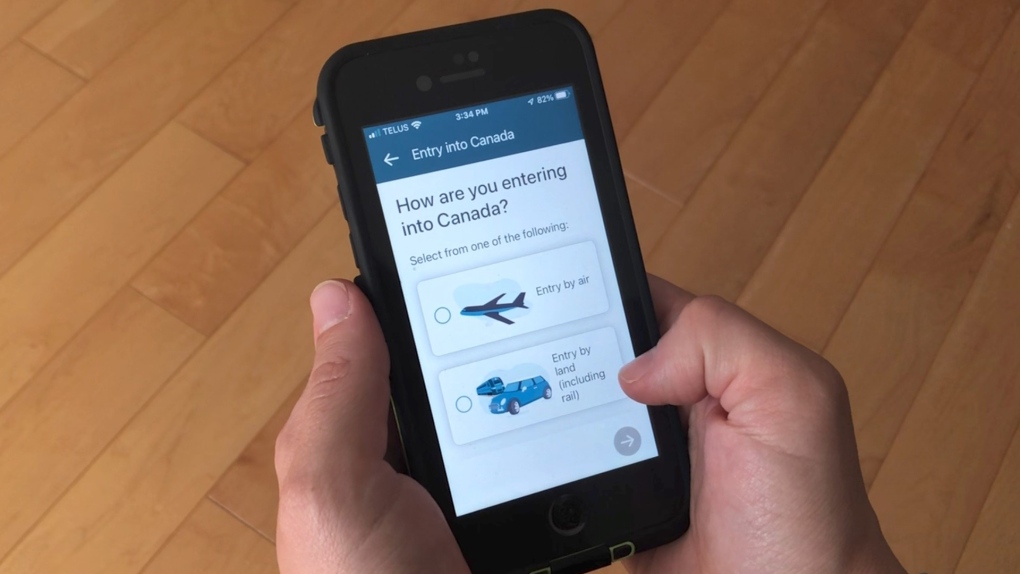 Border-city mayors are calling on the federal government to scrap the ArriveCan app requirements for travellers crossing the border. (Nate Vandermeer/CTV News Ottawa)

A coalition of Chambers of Commerce representing border communities across the country is calling on the federal government to suspend use of the ArriveCAN app.

The group is also asking the government to lift the remaining COVID-related border restrictions.

“The border measures are not only slowing down border crossings, but they’re also having a deterrent effect on visitors from the USA,” said Windsor-Essex Regional Chamber of Commerce CEO Rakesh Naidu. “The ArriveCAN app is hurting both our tourism industry and our economy in general.”

U.S. visits through land ports are still down significantly across the country, compared to before the pandemic. Statistics Canada reports that border crossings from the United States in June 2022 were little more than half the number made in June 2019.

Tourism spending in Canada is still more than a third below pre-pandemic levels. Wait times at land border crossings have lengthened by up to two hours since 2019 despite traffic being cut in half, and bridge authorities attribute this entirely to restrictions and the ArriveCAN app. The average processing time for arriving passengers at airports has increased by 400 per cent.

“It isn’t only affecting the tourism industry,” said Naidu. “More than half of the total trade Canada conducts with the United States is by truck. The additional time and resources spent on border measures and the ArriveCAN app slows the crossing for all and puts additional strain on already stretched supply chains.”

Naidu said the ArriveCAN app is just not effective in its current form.

“The app’s requirement of only the first two doses is not based on our current understanding about COVID-19 vaccination and immunity,” said Naidu. “Therefore, its effect on limiting the spread of the virus is minimal, while at the same time hurting our tourism sector and economy in general.”

Windsor West MP Brian Masse said it is really about reducing physical presence at the border through going through the process to use the actual ArriveCan.

“We may actually have some perjury at the House of Commons committee because I asked specifically whether ArriveCAN was actually just a cover for a more permanent app,” said Masse. “And that's what it seems to be there and I've talked with the union presidents as well to who suspects the same thing.”

Masse it’s not as safe and not as secure.

“It's not as even good for that model and we've seen it fail at the airports and what I worry is the land borders are next with regards to it. So that's what you know it is a good thing that they're not going to persecute people because they can't fill out their arrive count on time.”

Two monkeys were taken from the Dallas Zoo on Monday, police said, the latest in a string of odd incidents at the attraction being investigated -- including fences being cut and the suspicious death of an endangered vulture in the past few weeks.

Driver in California cliff crash that injured 4 is charged

The driver of a car that plunged off a treacherous cliff in northern California, seriously injuring himself, his wife and their two young children, was charged Monday with attempted murder.

A Russian company said it will offer five million roubles (US$72,000) in cash to the first soldiers who destroy or capture western-made tanks in Ukraine, after the Kremlin vowed Russian forces would wipe out any Western tanks shipped to Ukraine.