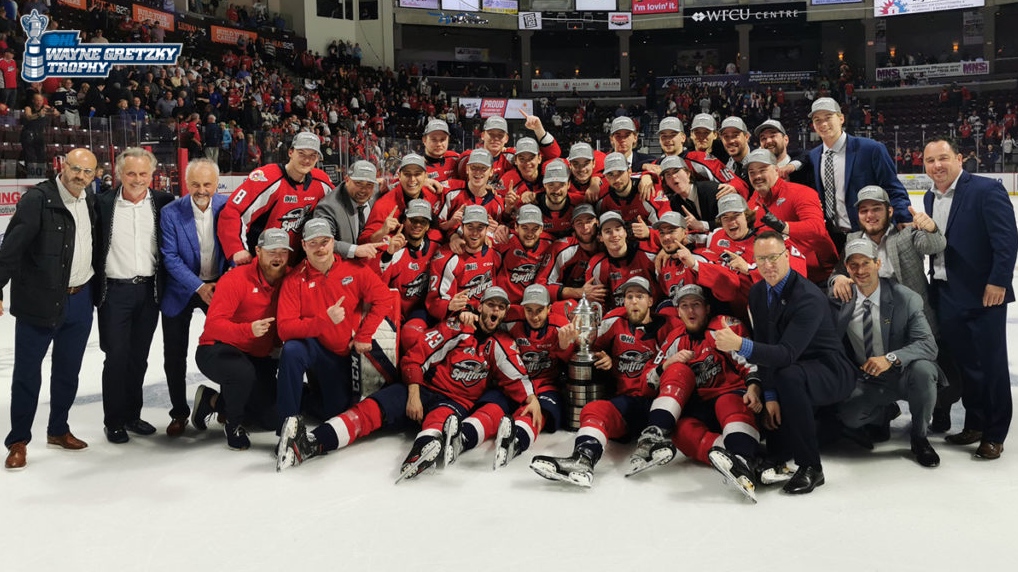 The Windsor Spitfires are back in the OHL playoffs for the first time since 2019 due to the COVID-19 pandemic.

The Spitfires are in the Ontario Hockey League's Championship Series for the first time since the 2009-2010 season. If they beat the Hamilton Bulldogs, they head to the 102nd Memorial Cup championship, which runs June 20-29 in Saint John, N.B.

The Windsor Spitfires will not be moving on to the Memorial Cup tournament in Saint John, New Brunswick. The Spits fell 6-1 to Hamilton in Game 7 of the OHL championship series. Windsor's lone goal was scored by Alex Christopoulos in the third period. Avery Hayes had the game-winning goal for the Bulldogs.

Windsor forced a Game 7 with a 5-2 win over Hamilton on Monday night. Michael Renwick scored the game winner for the Pits with assits from Will Cuylle and Wyatt Johnson.

The Bulldogs took a 3-2 series lead with a 3-2 win over the Spitfires in Hamilton. Wyatt Johnston and Ryan Abraham had goals for the Spitfires.

The Spitfires lost the fourth game in the series 3-2 in overtime. Josh Currie and Will Cuylle scored for the Spits. The Bulldogs tied the series 2-2.

Wyatt Johnston and Alex Christopoulos both scored two goals as the Spitfires beat the Bulldogs -3 in Game 3. The Spits moved ahead in the series 2-1.

Windsor lost Game 2 in Hamilton 5-4 on Sunday afternoon. The series is tied 1-1. Matthew Maggio had two goals and an assist for the Spitfires.

The Windsor Spitfires defeated the Hamilton Bulldogs 4-3 in overtime Friday night in the first game of the OHL Championships. Windsor currently leads the series 1-0.

Windsor beat the Flint Firebirds 4-0 in Game 7 of the Western Conference final on Wednesday night.

Spitfires’ Daniel D'Amico had three goals for the hat trick and Xavier Medina got the shutout in net.

The Spitfires forced a Game 7 with a a 3-2 overtime win on Wednesday. Daniel D'Amico scored two goals in regular play before Andrew Perrott scored the game-winner in OT.

The Spitfires won 4-2 in Game 4 to even up the Western Conference championship series. Daniel D’Amico scored the game-winning goal in the first period as the Spitfires held on for the victory. Windsor outshot Flint 38-30.

The Spitfires lost 6-3 to the Firebirds on Wednesday night. Flint leads the series 2-1.

Overall shots in the game were 45-40 for Flint. The Firebirds also went 1-for-3 on the power play while the Spitfires went 0-for-4.

Windsor evened the series 1-1 with a 7-2 win over the Firebirds on Monday. Matthew Maggio scored three goals for the Spits. Windsor had a 45-39 shot advantage.

The Windsor Spitfires fell short in the first game of the OHL Western Conference Finals, losing 4-3 against the Flint Firebirds after the Firebirds scored three goals in the second period.

Game two is scheduled for Monday in Windsor.

Thank you Windsor. Fans you were there when we needed you most! We feel the ❤️. Wincity unite for your Windsor Spitfires. #whateverittakes #windsorspitfires #itsyqg #yqgwow #windsoressex #windsorontario #ohlhockey #ohl #chl #twepi pic.twitter.com/uLawZJc9SV

The Windsor Spitfires are moving on to the third round of the OHL playoffs after defeating the Kitchener Rangers 3-2 in Game 5.

The Spitfires rebounded to beat the Rangers 6-3 in Game 4 on Thursday. Windsor has a 3-1 series lead in the best-of-seven series.

Wyatt Johnston and Alex Christopoulos each had two goals and two assists in the win, while captain Will Cuylle had three assists.

The Spitfires beat the Rangers 6-2 to take a 2-1 series lead. Wyatt Johnston scored twice for the Spits. Windsor outshot Kitchener 47-29.

The Spitfires fell 4-2 to the Rangers on Sunday night, tying the Western Conference semifinal 1-1.

Wyatt Johnston had a goal and an assist.

Jackson Parsons made 37 saves for the Rangers.

The first game of the series went to the Spitfires 6-5.

The Spitfires advanced to the second round on Sunday night with a 3-1 win over the Sarnia Sting.

Wyatt Johnston's goal late in the first period turned out to be the game-winner. Forward Jacob Maillet also scored twice.

The Sting stayed alive in the series with a 3-2 overtime win on Saturday night. Andrew Perrott and Will Cuylle scored for the Spitfires. Windsor outshot Sarnia 45-23.

The Spitfires earned a 3-1 series lead with a 4-1 win over the Sting 4-1 in Sarnia on Thursday night.

Will Cuylle scored a goal and added an assist and Wyatt Johnston had a goal.

The Sarnia Sting got their first win of the series, 5-2 on Wednesday. The Spitfires still have a 2-1 series lead. Ethan Miedema and Ryan Abraham scored for the Spitfires.

The Spitfires took a 2-0 series lead with a 4-1 win on home ice on Saturday night. Will Cuylle scored twice, while Daniel D'Amico and Wyatt Johnston also had goals for the Spits. Windsor outshot Sarnia 43-23.

The Spitfires returned to postseason action on Thursday with a 3-0 win over the Sarnia Sting.

The Spits and Sting are back in action on Saturday at the WFCU Centre. Puck drop is scheduled for 7:05pm.

For the second time in less than a month, a resident of Ashcroft, B.C., died while waiting for health care.