Gleaners across southwestern Ontario are preparing more than half a million servings of dehydrated soup mix to send to Ukrainians in need.

Volunteers have already processed and packaged more than that same amount since Russia’s invasion of Ukraine began in February.

“It touches home for a lot of people,” said Joel Epp, general manager of the Southwestern Ontario Gleaners. “For some of us our ancestors, grandparents, great-grandparents came from Ukraine, myself included.”

A sold out fundraiser luncheon for the SWO Gleaners took place Tuesday at the Roma Club in Leamington with over 500 tickets sold.

Epp said the proceeds will go towards their Ukrainian efforts.

“We want to help out where we can,” he said. 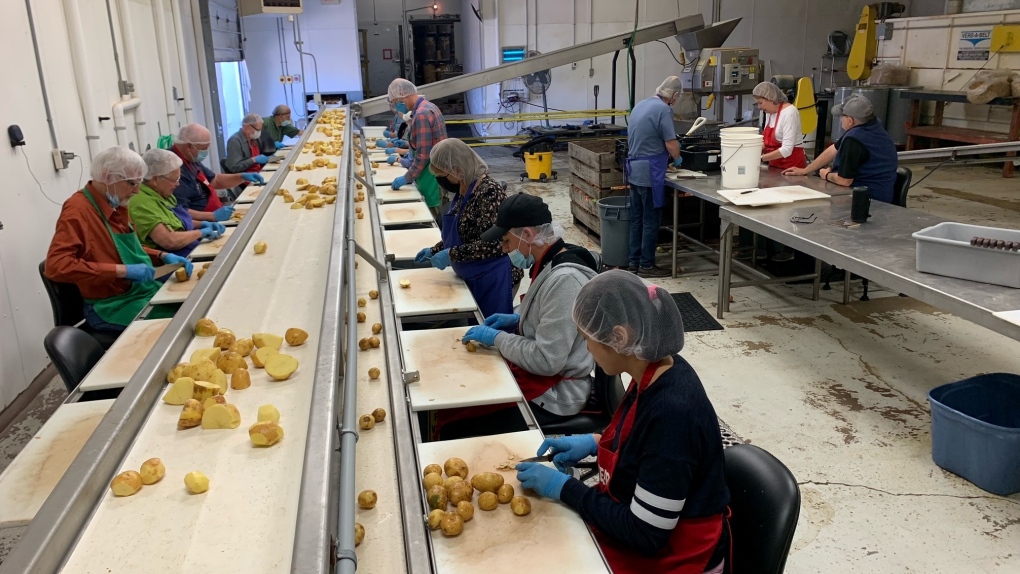 Food For All luncheon in Leamington, Ont., on Tuesday, May 24, 2022. (Chris Campbell/CTV News Windsor)

The Leamington-based organization has partnered with Loads of Love in Chatham to send the dry-mix to Ukrainian refugees in Poland.

Treasurer Tina Quiring explained Tuesday’s “Luncheon for All” was the first in-person fundraiser for the charitable group since the COVID-19 global pandemic began.

“This is a big celebration for us because we have not been able to have a fundraiser during COVID and so our volunteers kept coming, the businesses kept supporting us and so thank God we've been able to finally get together and it is truly a celebration,” she said.

Quiring said millions of pounds worth of produce that would otherwise be wasted is instead processed daily by volunteers to be packaged and distributed around the world.

Quiring added, “I'm very happy and grateful. There's so many wonderful people that have made an effort to come here and support us and we're truly grateful for the community.”

Officials say volunteers are always welcome and that a small load of dehydrated food will go out at the end of the month, before a large shipment leaves in July.

Russia rejects $60-a-barrel cap on its oil, warns of cutoffs

Canada features in list of 23 best places to go in 2023, according to Conde Nast Traveller

Canada's British Columbia features in a list of the 23 best places to travel in the world in 2023. The list was created by travel magazine Condé Nast Traveller.