A Windsor man is charged with dangerous driving, after crashing into a Seminole Street church early Tuesday morning.

According to police, a fully marked cruiser was stopped at a red light at the intersection of Central Avenue and Seminole Street around 3:15 a.m., when an officer heard the revving of an approaching vehicle.

The officer says a westbound silver Dodge Caliber travelling along Seminole passed in front of the cruiser, at approximately 120 km/h. However when police tried to catch up to the vehicle, the officer lost sight of the Caliber when it rounded a bend near Drouillard Road.

A few minutes later, police received a call about a silver vehicle striking the Fuente De Vida Church at Albert Road and Seminole Street. When police arrived they found the Caliber lodged within the side of the church.

Initial damage estimate to the vehicle and church is roughly $20,000. No injuries are reported.

The 20-year-old male driver is charged with dangerous operation of a motor vehicle.  The two 18-year-old passengers were not arrested.

Alcohol is not considered to be a factor. 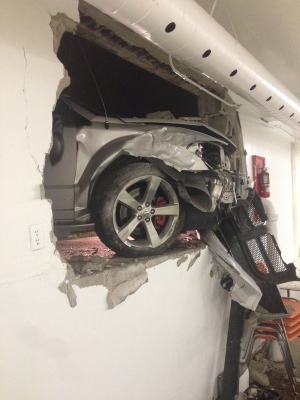 In pictures: Car crashes into church

IN PICTURES A Windsor man is charged, after police say he crashed into the side of Fuente De Vida Church on Seminole Street Tuesday morning.