Historic streetcar to get $500-$750K restoration 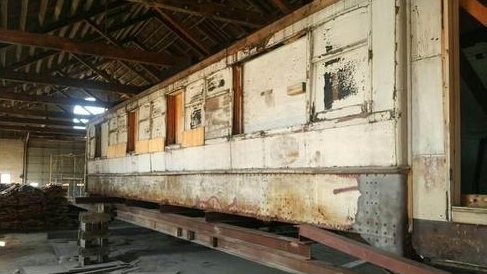 Two businessmen have a streetcar that use to operate in Windsor in the late 1800's in storage. (Photo supplied by Mayor Drew Dilkens)

One of the last remaining streetcars from the Sandwich, Windsor and Amherstburg railway system is now property of the city of Windsor.

Council on Monday approved accepting the donation of streetcar number 351 from Windsor businessman Van Niforos in exchange for a $100,000 tax donation receipt.

“This was one of really three remaining street cars in the world, one of three of the 220 that operated in the City of Windsor,” said Mayor Drew Dilkens. “We now have a chance to own it, restore it, put it on display and be proud of our history and use it in a functional way that satisfies the central riverfront implementation plan.”

Did council move to fast?

It’s a deal that had to come together quickly, according to Dilkens, because Niforos needs the trolley out of his downtown property by Nov. 9 for a real estate transaction to close.

The restoration work is being sole-sourced to world-renowned RM Auto Restoration. The Blenheim-based company has won international recognition for its work restoring cars over the past 30 years.

Some members of council expressed concern over the practice of sole-sourcing rather than issuing a request for proposals.

“Yes we want the streetcar,” said ward 8 coun. Bill Marra. “But after that, we need time to figure out what is the best option.”

“I don’t believe that’s we’ve investigated all of the options ahead of us tonight,” said ward 4 coun. Chris Holt during deliberation. “I just feel the process is a bit rushed and we need to alter it a little bit.”

“I feel we can still take the donation of the street car and investigate how to incorporate the great craftsmen within our community, the great volunteerism in the community and to bring this to life,” Holt said.

Mayor Dilkens says it was sole-sourced because the project is a huge undertaking and RM Auto Restoration is the best at what they do. He noted that council has sole-sourced very specialized work before, as it did with the restoration of the Lancaster Bomber.

“There are not folks just sitting around who can move this car to their garage and you can have them tinker with it for the next 10 years,” Dilkens said after the meeting. “This is a 25,000 pound vehicle that’s 50-feet long, that’s quite tall, and you need someone who knows what they’re doing.”

When the restoration is complete, the city would like to mount the trolley on salvaged SW&A rail tracks somewhere along the riverfront as one of the legacy beacons identified in the central riverfront implementation plan.

Work to restore the streetcar will take up to two years.

In the meantime, residents will be consulted about where along the riverfront the railcar will be mounted to the tracks, and what form it will take on.

“We’re going to be able to clarify what the community would like to see in this very unique piece that will underline the incredible history in the region,” said ward 6 coun. Jo-Anne Gignac.

“It’s a large amount of money,” she admitted, “but I’ve been looking for opportunities to animate the waterfront… and provide amenities for people that are drawn to it, but have often said they would really like the opportunity to grab ice cream with their children, or rent a bike.”