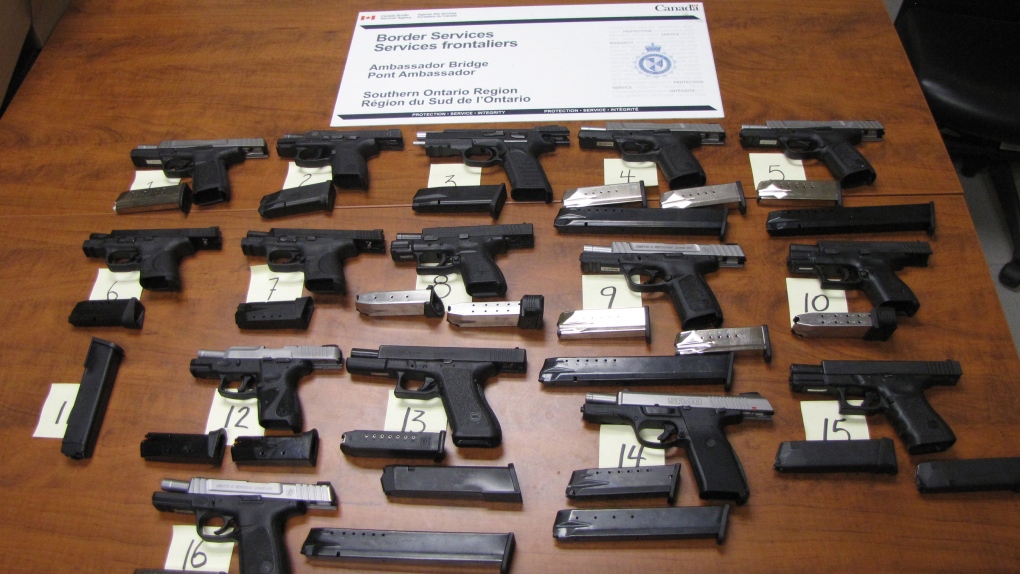 The CBSA reports 15 undeclared handguns along with 26 various capacity magazines were found in a vehicle at the Ambassador Bridge on June 20, 2019. ( photo supplied by the CBSA )

The Canadian Border Services Agency says more than 20 undeclared guns were seized from vehicles attempting to enter the country through Windsor.

Officials say the seizures were made from three different vehicles from the U.S. between June and August.

The biggest bust occurred on June 20 at the Ambassador Bridge.

The CBSA said officers found 15 undeclared handguns in a vehicle as well as 26 various capacity magazines. Two men and a woman, all United States residents, were charged by the CBSA.

The most recent incident happened on August 20 when officers examined a "recreational motor vehicle" on the Windsor side of the Ambassador Bridge. They found three firearms, one semi-automatic rifle and one shotgun. A U.S. resident driving the vehicle was charged.

On August 1, the CBSA said a vehicle arrived on the Canadian side of the Detroit-Windsor Tunnel and officers discovered two undeclared firearms in the driver’s purse.

The driver paid the $2,000 terms of release for the conveyance, the firearms were seized and she returned to the United States.

The CBSA also reports from January 1 to August 30, 2019, officers seized 231 firearms at various ports of entry throughout the Southern Ontario Region.

The CBSA added each firearm seized at the border contributes to making communities across the country safer and ensures that these weapons remain off Canadian streets.