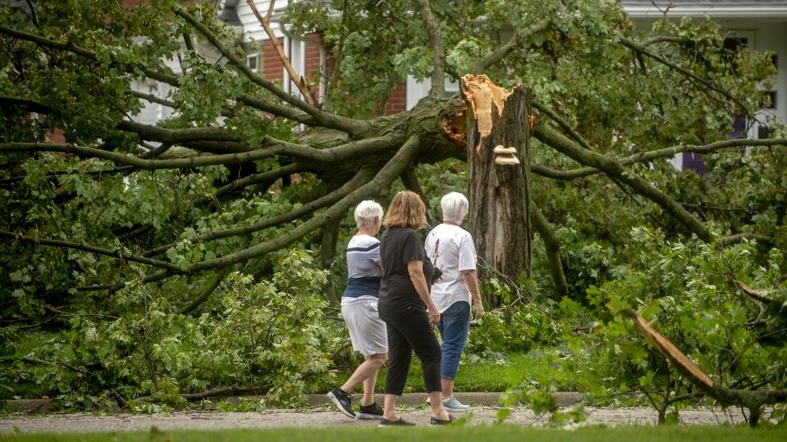 Flooding brought by heavy rains shut down some freeways in the Detroit area Thursday as waves of thunderstorms made their way across large swaths of the Midwest, leaving nearly 1 million homes and businesses without power in Michigan at one point.

The storms continued Thursday afternoon as dangerous heat persisted in the Northwest, Northeast and the central portions of the country. Heat warnings and heat advisories were in effect for another day Thursday. Local officials opened cooling shelters for residents sweltering in the hot conditions.

Michigan utilities that had been working to restore power following earlier outages caused by high winds reported more than 970,000 outages in the state Thursday morning following overnight storms, with two-thirds of those involving DTE Energy customers in southeastern Michigan.

Wisconsin, Illinois and Indiana also have been hit by recent rounds of storms. Utility poles were broken and transformers damaged in the Fort Wayne and South Bend areas of northwestern Indiana following Wednesday storms.

Indiana Michigan Power said 9,623 of its customers in southwestern Michigan and northwestern Indiana were waiting Thursday night to have their service restored.

In Wisconsin, residents took cover Wednesday from a sixth straight day of severe thunderstorms, and at least two tornadoes touched in the west-central and northeast parts of the state. Authorities in Monroe County, about 100 miles northwest of the state capital of Madison, said a tornado there destroyed a barn and a shooting club. No one was hurt.

Opening day events Thursday evening at the Illinois State Fair in Sangamon County were canceled due to severe weather advisories, according to the state Department of Agriculture.

Retirements, high training costs and poor pay are fuelling a pilot shortage in Canada, industry analysts say, at a time when travel has surged in the wake of the COVID-19 pandemic.