A father-son duo from Hamilton have set off on a cross-country drive, centred around raising awareness for cancer research and cherishing the time they have left together.

On Friday, following months of planning, 85-year-old Ray Osborn and his son made the drive down to Windsor, Ont., to pick up a newly restored 1927 Ford Model A.

The two are taking it for a drive from Windsor to Vancouver for what Osborn calls "his last big journey."

That is because the 85-year-old has terminal cancer.

Osborn's classic car carries a lot of history. It was built in October of 1927 in Windsor as a demonstration vehicle, being transferred to different dealerships so people could test it out before purchasing a similar vehicle the following year. 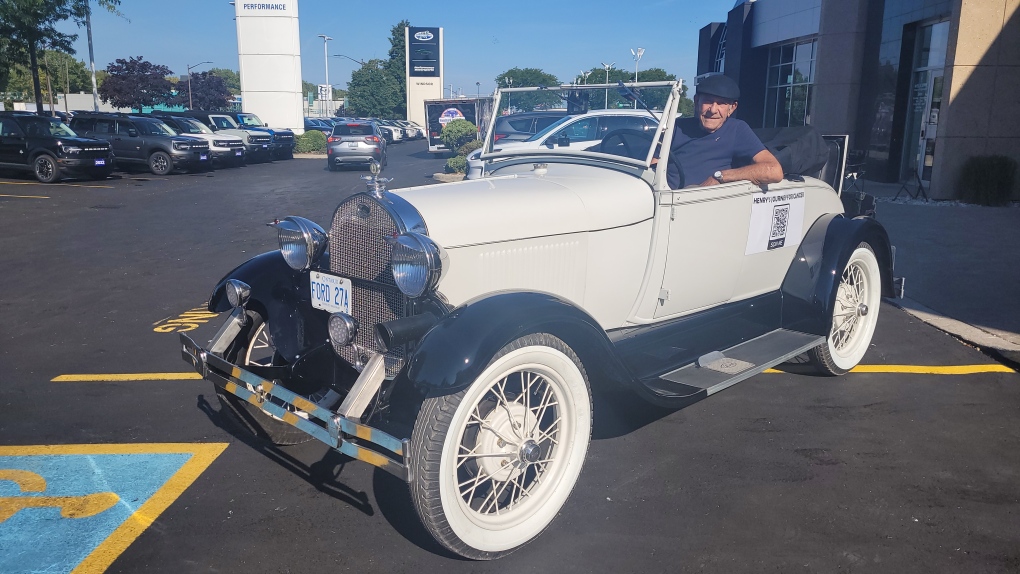 Osborn, 85, sits in his 1927 Ford Model A. The car was originally meant to be a demonstration vehicle, but an individual that Osborn bought it from in 1965 convinced a dealership to sell it to him. (Sanjay Maru/CTV News Windsor)However, according to Osborn, a member of Hamilton's Stewart family "used his connections" to purchase it for his wife for Christmas that year.

"I actually bought it from Mr. Stewart almost 60 years ago," recalls Osborn.

Since 1963, Osborn has owned the vehicle, taking it on drives with his children and grandkids.

"I've had this car 60 some-odd years. It was born in Windsor. This is where it was built. So I thought it only fitting that it starts in Windsor to do its last journey," he says. "Henry is the name that I've given the car and Henry's taking its last trip across Canada...for me, it's my last big journey too."

The idea for a father and son, cross-country drive sparked about six months ago, according to Obsorn's son Michael Ludwig.

"He's not going to be able to make too many more long trips, so we thought, 'let’s do something with each other [and] have a nice little bonding trip,’" says Ludwig.

He added, "While we're doing it, we can raise little extra money for cancer and try to help out other people."

But before the two could set off toward British Columbia, Osborn's classic car needed to be restored so it could handle the long drive.

The car was handed over to London-based Weedmark Classic Cars, according to owner James Weedmark. 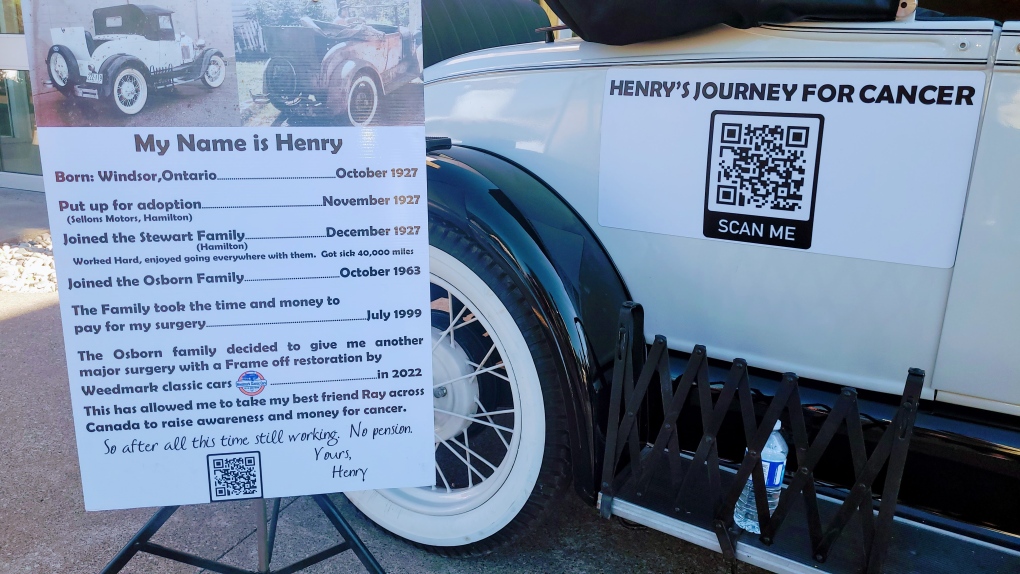 The father-son duo will be making stops in various cities along the way, showcasing the history of the car and asking for donations to support costs associated with the journey and the Canadian Cancer Society. (Sanjay Maru/CTV News Windsor)"It's one of those nerve-wracking things where you want to make sure everything is perfect. It's a long distance," says Weedmark.

The biggest challenge of restoring the vehicle, Weedmark says, was finding the necessary parts for it since the vehicle was built 95 years ago ⁠— ten years before Osborn was born.

But with the assistance of companies in Canada and the U.S., along with local mechanics, the restoration was a success.

"Everybody came together because the cause is awesome. It's an awesome experience. You get an opportunity to work on something you may never see again," says Weedmark.

Following the restoration, the Ford Model A was brought to Windsor’s Performance Ford dealership where Osborn and Ludwig started their cross-country journey ⁠— spanning more than 4,000 kilometres.

The father-son duo plans to make stops in cities along the way, sharing Osborn's story, raising awareness about the importance of supporting cancer research and asking for donations through a QR code posted on the vehicle.

China may respond to the U.S. shooting down its suspected spy balloon after warning of 'serious repercussions,' but analysts say any move will likely be finely calibrated to keep from worsening ties that both sides have been seeking to repair.

Canadian researchers are drawing attention to the increasing prevalence of 'a pathological pursuit of muscularity' among Canadian boys and young men, with a new study that found one in four were at risk of developing what's known as muscle dysmorphia.

A former Israeli prime minister who served briefly as a mediator at the start of Russia's war with Ukraine says he drew a promise from the Russian president not to kill his Ukrainian counterpart.

The U.S. military on Saturday shot down a suspected Chinese spy balloon off the Carolina coast after it traversed sensitive military sites across North America. China insisted the flyover was an accident involving a civilian aircraft and threatened repercussions.

The federal defence Minister says Canada 'unequivocally supports' the United States government's decision to shoot down a high-altitude surveillance balloon that was suspected of spying for China, noting the balloon violated Canadian airspace.

Justice Minister and Attorney General David Lametti says he is open to amending bail laws, which have come under increased scrutiny following the shooting death of an Ontario Provincial Police officer.

Republicans in some heavily conservative states won their campaigns for secretary of state last year after claiming they would make sweeping changes aimed at keeping fraud out of elections.