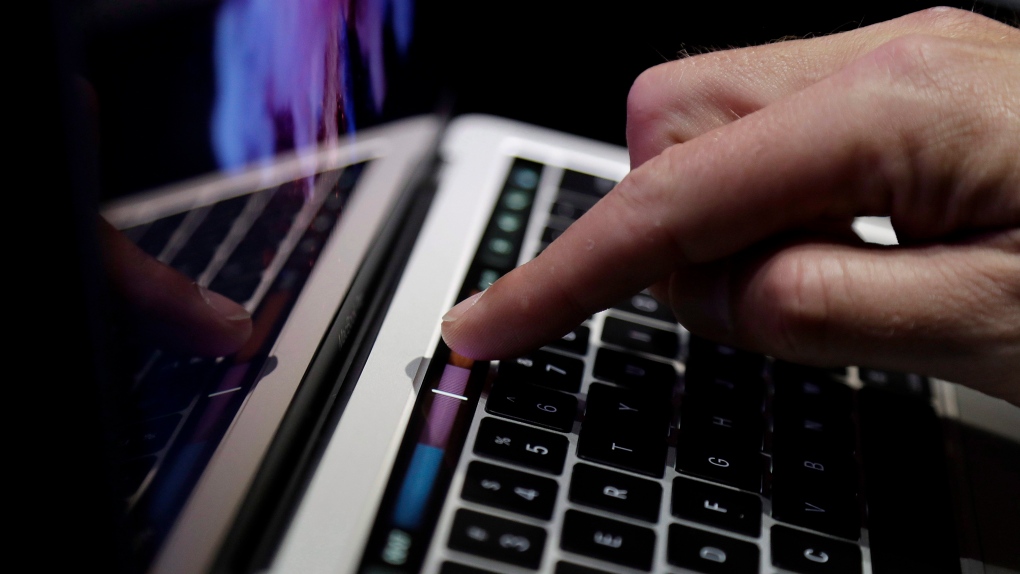 In this Oct. 27, 2016, file photo, a guest looks at the Touch Bar on a MacBook computer shown in a demo room following the announcement of new products at Apple headquarters, in Cupertino, Calif. (AP Photo/Marcio Jose Sanchez, File)

TORONTO -- Women in Canadian tech jobs, with a bachelor's degree or higher, earn nearly $20,000 less a year than their male counterparts -- and that pay gap can be just as stark for visible minority and Indigenous tech workers, a new study says.

The Brookfield Institute for Innovation and Entrepreneurship, housed within Ryerson University in Toronto, crunched 2016 Statistics Canada census data with methodology based on the U.S. O..Net system for skills breakdowns.

"These numbers pop out at you," said Sean Mullin, the Brookfield Institute's executive director.

"An almost $20,000 gap between men and women with a bachelor's degree in the same profession in 2016, is still a pretty significant thing and we as citizens, should aspire to be better than that and to fix those types of disparities."

The report defines tech workers as people either producing or making extensive use of technology, regardless of industry.

The research encompasses both digital occupations, which typically contribute to the development of hardware or software, and high-tech occupations that require advanced technical skills and usually includes engineers and scientists.

Brookfield said there are about 935,000 Canadians working tech occupations, representing 5.1 per cent of the Canadian labour force that year.

When all Canadian tech jobs are examined, regardless of education, the pay gap shrinks to $7,300 with men earning $76,200 annually on average and women earning roughly $68,900.

Mullin said the report didn't delve into causes of the gap, but noted that men were being drawn to more technical, higher paying jobs. He also pointed out that general research has shown women are less likely to enter science, technology, engineering and math careers and face additional barriers from family and cultural stereotypes.

"There are diversity and representation challenges, but they are not necessarily worse than other parts of the economy," he said. "In some ways (tech) is better, but better is not good enough. We shouldn't be satisfied with better."

Across visible minority groups, the study found women receive lower compensation than their male counterparts in almost all cases. The exception was Chinese women, with an average salary $73,430 -- about on par with Chinese men.

Inuit tech workers, regardless of sex, made about $45,000 per year on average. Workers identifying as First Nations earned $64,000 and Metis tech workers averaged $71,700.

"The tech sector has a long way to go," said Mullin. "There shouldn't be any reason why there are salary differentials between these groups and yet the data shows that there are."

But Mullin stressed that the report didn't just find areas in need of improvement, but bright spots too.

Mullin said the Canadian tech sector has grown by 24 per cent over 10 years, becoming the country's third highest category for jobs for growth.

Canada, he said, is on track to add at least another 200,000 jobs in the sector over the next decade.

"The tech sector is a good thing. These people are growing part of our economy and they tend to pay more than the average," he said, "but if the tech sector is gong to be a big part of Canada's future then we have to make sure it is being accessible and participation in it is open to everybody."