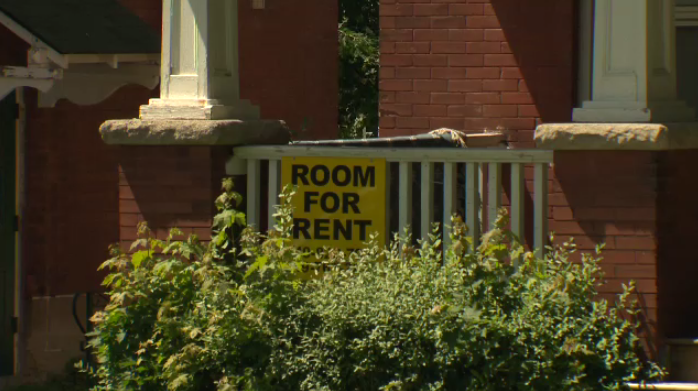 A "room for rent" sign seen on this building.

Council approved the two-year pilot, exclusive to Wards 1 and Ward 2, by a recorded vote of 10 to 1.

The pilot is meant to complement the existing system, where a renter can contact the city through 3-1-1 and lodge a formal complaint about their property or landlord.

But Ward 2 Coun. Fabio Costante, who put forth the motion, says while “reactive” enforcement has been somewhat successful, tenants often don’t report their living conditions out of fear of reprisal.

Costante says the new pilot project will call for regular inspections of all properties by bylaw enforcement officers, who will inspect rental properties for building and fire code violations.

Council chose to pilot the new bylaw for two years in these specific wards, which are host to the main campuses of St. Clair College and The University of Windsor. Residents in these neighbourhoods have been complaining and calling for a rental licensing scheme for more than a decade.

“I want this to be the council that moves forward and fights for better standards for tenants in our community,” Costante says. “I think this is a really good compromise, I think it’s sensible, and I think ultimately, it’s surgical in nature. It addresses the root cause that the residential rental license is intended to address.”

Coun. Rino Bortolin was the only councillor to vote against. He agreed it’s a “baby-step” in the right direction, but didn’t support the motion because he believes the licensing bylaw should be city-wide, not just limited to so-called student housing areas.

“There are issues with the student housing, definitely not denying that and recognizing there needs to be a huge, targeted approach,” Bortolin says. “But there are residents that are stuck in these types of situations for years.”

Bortolin says by approving this, council is deferring action for residents in other parts of the city, who will now have to wait another three or four years when the pilot project wraps up, before something gets addressed in other neighbourhoods.

“I can’t support this because I do think there are so many flaws specifically with the fact that it’s such an open-ended motion that we don’t know the measurables are,” he says.