WINDSOR, ONT. -- The restaurant industry in Windsor is facing some of the greatest struggles it’s ever seen as layoffs creep past 300,000 in Ontario according to a new survey.

A Restaurants Canada survey released on April 2 shows a total estimate of 800,000 foodservice layoffs across the country since March 1, following government measures meant to prevent the spread of the COVID-19 novel coronavirus.

Asked if the challenges posed by COVID-19 measures represent the single greatest threat to the foodservice industry, Walkerville Tavern Owner Cara Kennedy agrees — this takes the cake in her 35-plus years in the business.

“This is it,” says Kennedy.

Bars and restaurants were ordered closed by Ontario Premier Doug Ford on March 17, except for those that are able to offer takeout and delivery, as part of a state of emergency declaration.

Kennedy says her bar adjusted to takeout service, but soon decided to board up and close following a brazen break-in on March 26.

A man can be seen on security camera throwing a brick through the glass of the front door, scurrying in and making off with a small amount of alcohol from the bar fridge.

“It was more the next day, I guess the reality of it,” says Kennedy. “What to do? How do we move forward?”

Kennedy says in total 12 staff were laid off, including herself.

Newly announced incentives like a federal government-backed small business loan and a 75 per cent wage subsidy are measures Kennedy says will help.

“We do qualify and it will help us,” says Kennedy. “Now, whether we keep that in the bank and use it towards payroll when we need to or what have you, but the generosity of the $40,000 for someone like us who is small, that’s a gift.”

New on the block

Newly-opened Ottawa Street joint Smokies BBQ only first began serving customers on December 7, 2019 — and it’s been a hard lesson in entrepreneurship since.

“We did take a hit, but at the same time there’s not much we can do right now,” says Uzair Sharif, co-owner of Smokies BBQ. 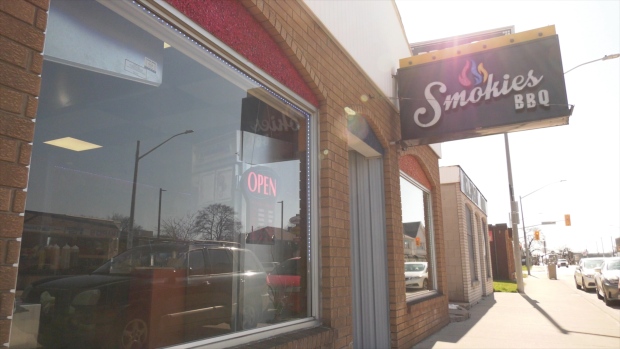 The small operation has a few tables for those that want to dine-in — now sitting empty — but Sharif says being able to offer takeout is helping the young business get by in uncertain times.

“No one’s really sure these days what’s going on, right? I have a family too who don’t know when they’re going back to work,” says Sharif. “At least I’m in a position where I can come to work and still make some income for my family.”

As highlighted in the Restaurants Canada survey, the impact to the foodservice sector has been widespread and, if conditions don’t improve, some of those lost jobs may not come back anytime soon.

Adriano Ciotoli of Windsor Eats, a hospitality marketing and event promoter, tells CTV News many of the restauranteurs and owners he hears from are already in dire straits.

“It’s really scary to think about because, in my opinion, it’s already getting to the point where it’s going too long for some of these restaurants,” says Ciotoli.

Windsor Eats has waived all fees for its members and is offering free membership new applicants.

Ciotoli describes the foodservice industry as “the canary in the coal mine” of the economic impacts brought on by wide ranging COVID-19 measures.

“By removing that, we’ve lost 100 per cent of our revenue stream,” says Ciotoli. “It pretty much is survival mode for a lot of businesses right now.”

Despite the current hardships, Kennedy sees light at the end of the tunnel.

Kennedy’s kitchen manager and local artist, George Rizok, has begun painting the plywood boards put up following the break-in, to create a mural in honour of frontline healthcare workers fighting the pandemic — to bring some joy and colour to the street in trying times.