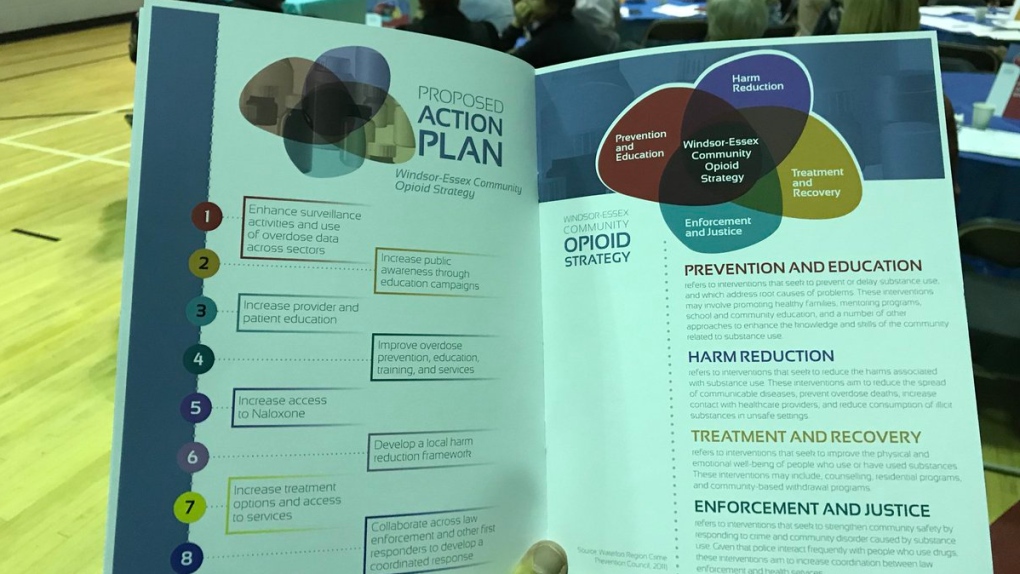 A community consultation event this evening discussing a proposed action plan to deal with opioid use in Windsor, Ont, on Tuesday, Oct. 18, 2017. (Angelo Aversa / CTV Windsor)

Those on the front lines battling addiction to opioids in Windsor-Essex are getting an earful.

The Community Opioid Strategy Leadership Committee hosted a meeting at the downtown YMCA on Tuesday night to discuss a new strategy to fight the problem.

Some parents say the opioid problem is deeper than some suggest.

Dion Parent claims his two 25-year-old twin daughters are dealing with opioid addiction, but they constantly run into road blocks when looking for help.

“I've tried pretty much every avenue you can think of and I'm still involved with House of Sophrosyne and places like that trying to help us still with our daughters and trying to get them help and it's just a frustrating road,” says Parent.

The Windsor-Essex Health Unit says the rate of opioid-use locally is nearly 19 per cent higher than the provincial average.

Michael Parkinson was a guest speaker at Tuesday’s meeting. Parkinson is with the Waterloo Region Crime Prevention Council.

The Community Opioid Strategy Leadership Committee has released an 8-point plan intended to help educate the public about the dangers of opioids while finding ways to help treat addiction.

A second public consultation meeting is set for Wednesday at the Leamington Kinsmen Recreation Complex. Doors open at 5:30 p.m.