WINDSOR, ONT. -- Windsor Regional Hospital is officially taking ownership of a 60-acre property for the proposed new regional acute care hospital more than five years after the site was chosen.

The proposed site for the mega hospital is at the corner of County Rd. 42 and the 9th Concession.

The announcement was made Friday, coinciding with a cheque presentation in support of the new hospital from local farmer Frank Lafferty, whose sweet corn stand has been a seasonal fixture on the property for decades. 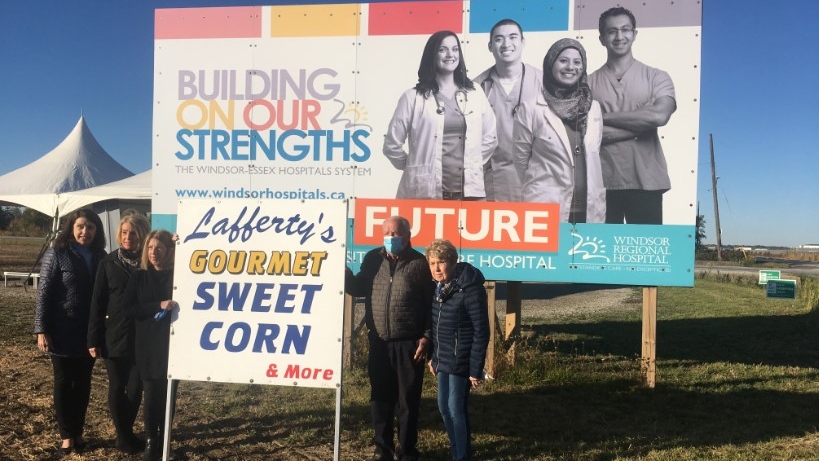 The purchase of sale agreement was originally signed in 2015 and closed this October after all of the agreed upon conditions, including proper zoning of the site and ministry approval of the project, were met.

“This development puts the future Windsor-Essex Hospitals System on solid ground,” says David Musyj, President and CEO of Windsor Regional Hospital. “Today, thanks to the commitment of Premier Doug Ford, Health Minister Christine Elliott, every elected official in this region who made moving this project forward a main priority and the Windsor Regional Hospital Foundation, we are taking a giant step toward a world-class hospital system for our region.”

WRH officials say the site was selected in 2015 by a volunteer committee whose members followed a clearly defined process that was outlined in a Request for Proposals.

The proposed location has been disputed by grassroots group Citizens for an Accountable Mega-Hospital Planning Process (CAMPP). At the end of July, CAMPP lost its motion for a leave to appeal a City of Windsor zoning decision that paves the way for the hospital to be built at the chosen site, seemingly ending its legal challenges to the project. CAMPP said in August they are still exploring possible further legal action.

The Board of Directors of Windsor Regional Hospital says they have ensured from the start an open, transparent, fulsome and fair due diligence process was completed.

Hospital officials say the 60-acre site includes room for the hospital to develop and grow over time to meet the region’s needs. It is located near major access roads and all major highways. It is within 10 kilometers from a majority of WRH patients and staff, and will tie into the Transit Windsor bus system, with service to the new hospital when it opens.

Under the agreement, the current owners, the O'Keefe family, will transfer 60 acres of land to Windsor Regional Hospital, at a price of $100,000/acre or $6 million as awarded through the detailed procurement process.

The new single-site acute care hospital will replace the two existing outdated acute care campuses. It will include a helipad so patients can be transported by helicopter to and from the site, ample parking for patients, visitor and staff, at least 80 per cent single-patient rooms to increase patient privacy and decrease the threat of infection and allow for a more comfortable stay for patients and families.

The new hospital is part of a system transformation that was announced along with the selected site on July 16, 2015 and includes a Centre of Mental Health Excellence at HDGH’s Tayfour Campus, which will be a single entry point to mental health care at this site and additional services in the downtown core including outpatient mental health, dialysis, chronic disease management, ambulatory and outpatient surgical services.

“Today’s announcement has been literally years in the making,” said Dave Cooke, co-chair of the Program and Services Steering Committee who was part of the original taskforce that recommended moving forward immediately with planning for a new regional hospital in November, 2012.

“Now that we have a site, we are ready to begin work on the next stages of planning so we can get shovels in the ground for a state-of-the-art acute care hospital.”

The purchase will allow Stage Two planning to begin as soon as the province provides funding.

The next steps of the planning process will take about 18 months to complete and include a detailed description of the programs to be delivered, the staffing, equipment and space required, and preliminary designs.

The Steering Committee overseeing the project has developed a detailed Community Engagement plan for Stage 2 that includes opportunities for all residents to have a voice and participate in the process.