Windsor proposes no increase to property tax levy in 2021 WINDSOR, ONT. -- The City of Windsor faces a number of potential pandemic-related challenges in the 2021 budget, but is still recommending a zero per cent property tax levy increase for the operating budget.

The city presented the budget Friday in a virtual press conference.

As CTV Windsor reported earlier in the week, the proposed tax freeze doesn’t include $37.7 million in “unfounded liabilities” caused by the pandemic.

The city says those higher costs for PPE, cleaning and operations, combined with reduced revenues from services and fees, as well as the tunnel and airport make up the bulk of that budget hit. The estimated $38 million shortfall also includes reduced dividends from hosting casino operations. 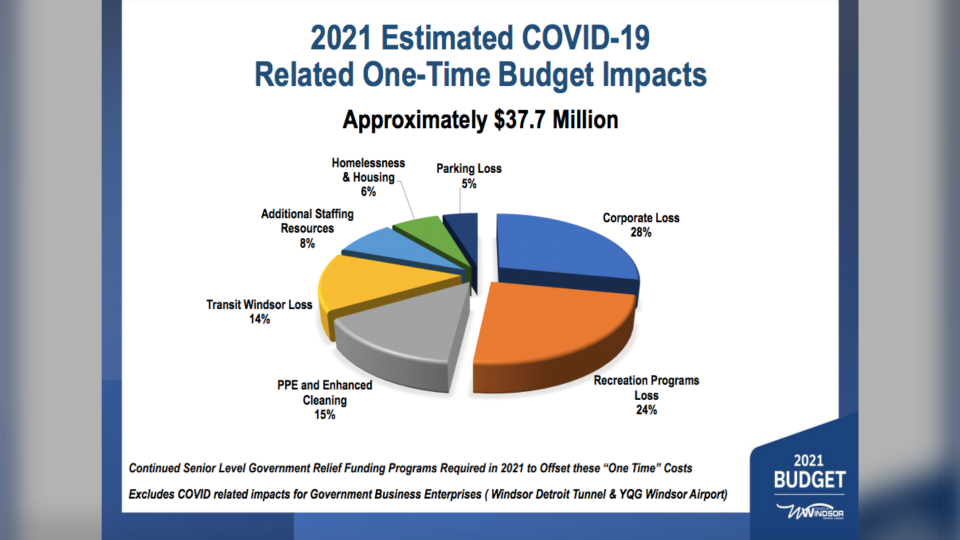 Instead of building those big numbers into the budget, which the mayor estimates would translate to a nine per cent property tax increase, they’re making a plea to upper levels of government to fund the short-fall.

“It would be unfair to ask Windsor taxpayers to resolve this $38 million pressure on our own before the end of February and before we have any insight into the federal and provincial budgets or relief funds,” says Dilkens, adding if those funds don’t come through, council will have some very difficult decisions to make.

Keeping the operating levy at zero means taking a hard line against any new initiatives, according to mayor Drew Dilkens.

The city saw increased costs totalling $10.5 million, but is offset by provincial reductions in the education levy that result in savings of an equal amount. 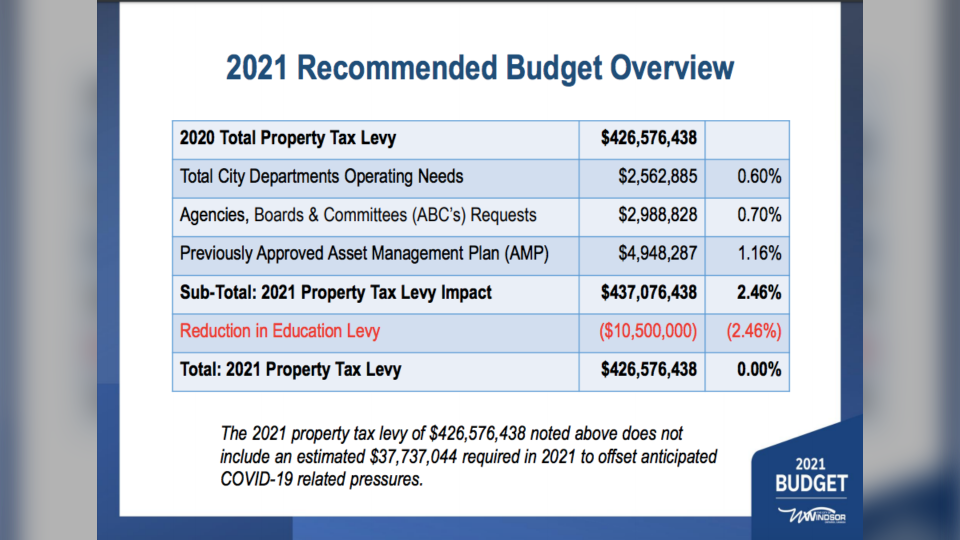 “This is a balanced plan that protects Windsor ratepayers while investing in the services that our community deserves and expects,” says Dilkens.

But that doesn’t mean there won’t be any capital investments.

Windsor is projecting that by 2030, it will spend roughly $1.6 billion on these kinds of investments.

That includes a proposed investment of $170 million in 2021.

“Administration remains confident that the city’s healthy financial profile and its continued strong, fiscal discipline will allow us to weather the financial challenges we will face in the post-COVID-19 period,” says the city’s chief financial officer, Joe Mancina.

Council will deliberate the budget virtually on Feb. 22, 2021.