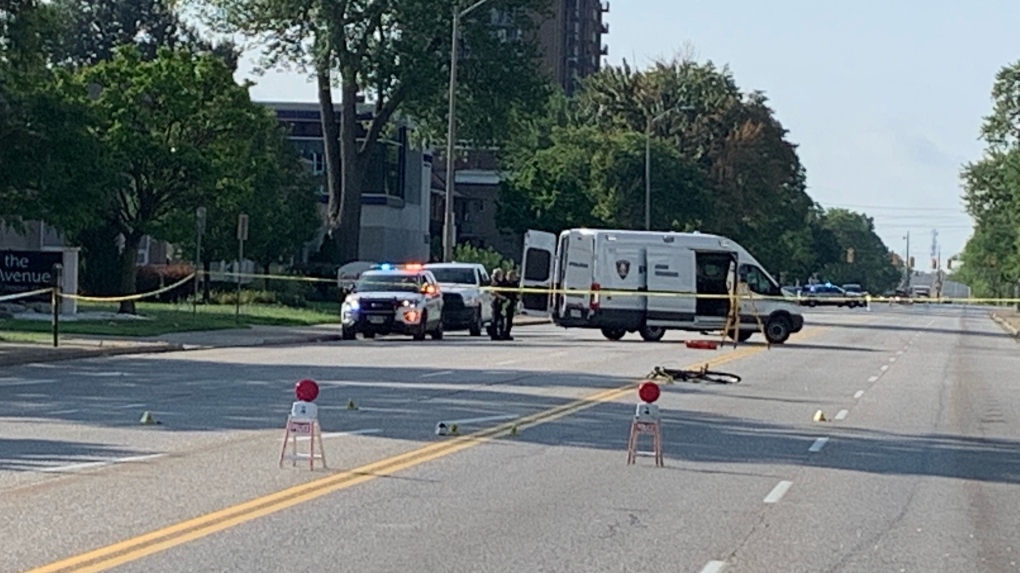 Ouellette Avenue was closed in both directions between Hanna Street and Shepherd Avenue in Windsor, Ont. on Saturday, Aug. 6, 2022. (Chris Campbell/CTV News Windsor)

Windsor police have charged a driver believed to be involved in a downtown hit and run that left a cyclist with life-threatening injuries.

Police launched a hit-and-run investigation after a report of an injured cyclist at the intersection of Ouellette Avenue and Shepherd Street around 5:15 a.m. Saturday.

Police say an adult man was found in the roadway along with a damaged bike, however, no vehicle believed to be involved was located in the area.

Through investigation, police identified the driver who was arrested on Tuesday in Essex.

The vehicle was also found and seized as evidence.

While an arrest has been made, police are still asking for video evidence of the vehicle driving in the area before and after the incident.

Police have arrested a 33-year-old Essex man who is now facing a charge of leaving an accident scene which caused bodily hard and was released on an undertaking with a future court date.

Sport Minister Pascale St-Onge is once again calling for change in Hockey Canada's leadership in the wake of new allegations against the troubled sporting body.

Ukraine claws back more territory Russia is trying to absorb

Ukrainian troops pushed forward Monday with their offensive that has embarrassed Moscow, with Kyiv officials and foreign observers hinting at new gains in the strategic southern region of Kherson that the Kremlin wants to annex.

Canadian Prime Minister Justin Trudeau took a plunge this weekend when he decided to throw caution to the wind and go bungee jumping just outside of the Ottawa area on Sunday.

RCMP seeing 'significant increase' in fraudulent activity in Canada since 2020

Citing a 'significant increase' in fraudulent activity in Canada in the last two years— the majority of which in the last year has been happening online—the RCMP is calling on Canadians to be aware of scammers' tactics.

The would-be winners of almost $29,000 at a U.S. fishing tournament were disqualified on Friday, after it was discovered their fish were stuffed with lead weights and fish fillets.

Federal Conservatives say the Liberal dental-care and rental-housing relief legislation will only add to inflation without providing relief from the rising cost of living.

The big day is here: Quebecers head to the polls

Quebecers are casting their votes Monday after a five-week election campaign. Incumbent premier Francois Legault's CAQ party has held a comfortable lead since the campaign began, but the battle for second has been tight between the four main opposition parties: Liberals, Quebec solidaire, Parti Quebecois and Conservative Party of Quebec.

A trial that started this week in Washington, D.C., is the biggest test yet in the U.S. Justice Department's efforts to hold accountable those responsible for the attack on the Capitol on Jan. 6, 2021. On trial is extremist leader Stewart Rhodes, founder of the Oath Keepers extremist group, and four associates.

'The time is now': Doctors ask Canadians how to reform primary care

A family doctor and other researchers are asking Canadians to share their experiences with the country's primary health-care system and what they want from it, as a way to help guide future reform.