Windsor parents among hundreds at autism rally at Queen's Park 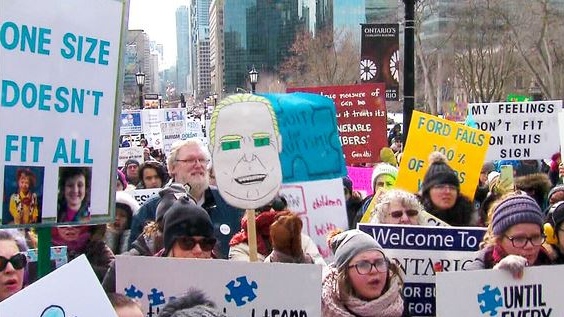 Hundreds of families and advocates of children with autism, including some from Windsor-Essex, protested at Ontario's legislature on March 7, 2019. ( Beatrice Vaisman / CTV Barrie )

Hundreds of families and advocates of children with autism, including some from Windsor-Essex, are protesting on the lawn of Ontario's legislature to urge the government to reverse changes to the autism program.

Children, Community and Social Services Minister Lisa MacLeod announced last month that in order to clear a waiting list of 23,000 children, kids with autism would receive direct funding to pay for treatment.

Parents are calling for the funding to be based on children's individual needs, instead of just their age.

Among the parents in Toronto is April Pare of Windsor, the mother of seven-year-old Addison who was diagnosed with moderate autism at the age of two.

“I urge them to go back to the drawing board and figure out a better way,” said Pare in a recent interview with CTV Windsor.

Tina Walker has two children on the autism spectrum -- one on the wait list and one in full-time therapy -- and she says she wants MacLeod to know it's more important to help kids than to stick to a flawed policy.

Kristen Visser, whose six-year-old daughter is in therapy, says the government is not listening to the people, noting that families would not be protesting all over the province if the government had got the program right.

MacLeod is not attending the protest because she claims to have received threats.