WINDSOR, ONT. -- Graduation is a rite of passage — a big step in a long, educational journey for students.

That unfortunately will look very different this year, due to public health restrictions caused by the COVID-19 pandemic.

“It’s really disappointing not being able to graduate and go to prom and have that ceremony and stuff,” says Anna Smith, a Grade 12 student at F. J. Brennan Catholic School.

But her father is doing the best he can muster to give his twin daughters the send-off they deserve.

“This is the reward, this is what you’ve worked for,” James Smith says.

Smith rented a stage for his driveway to give them the proper send off.

“We were doing it for our girls. We wanted to do something for our twins,” he says. “And from there, we sort of expanded.”

Since he initially posted the graduation gift to Facebook, it has expanded so much that next Friday and Saturday, Smith has already booked 65, 15 minute slots for other grads to get their due send-off on his driveway.

Smith doubles as a captain for the upcoming June 27th Miracle. He’s offering up his driveway stage free of charge — only asking for a non-perishable food or toiletry donation for the Miracle drive.

“I want the parents to be able to take a picture of their kid on the grad stage,” Smith says. “I mean, it’s important, right?”

His daughters, who are headed to St. Clair College next year, are happy to get some semblance of a ceremony to cap off their high school careers.

“I truly believe that every grad should be able to walk across the stage I think that it’s really important and ya, it’s a big milestone for sure,” says Morgan Smith.

“It’s so important academically and it’s really a big symbol of moving on with your life, and the best chapters of your life,” echoes her twin sister, Anna.

Hailey Nickolson, a Grade 12 student at Riverside Secondary School, is also graduating this year. Next weekend, she’s also walking across the stage on Smith’s driveway.

“It’s amazing, and I’m really, really thankful that I get to actually have a graduation,” Nickolson says.

But even those students not lucky enough to get a spot on that stage — are getting a nice send-off from their schools.

Katelynn Akins is one of 5,300 grads at the public board — getting a personalized lawn sign from their school.

“I feel proud of myself because I passed Grade 8,” says Akins, who will be moving on from General Brock.

Her Grade 8 teachers, Stephanie Douglas and Louisa Mattina, walked the neighbourhood Tuesday, dropping off a sign at each of the 16 graduating students’ homes. 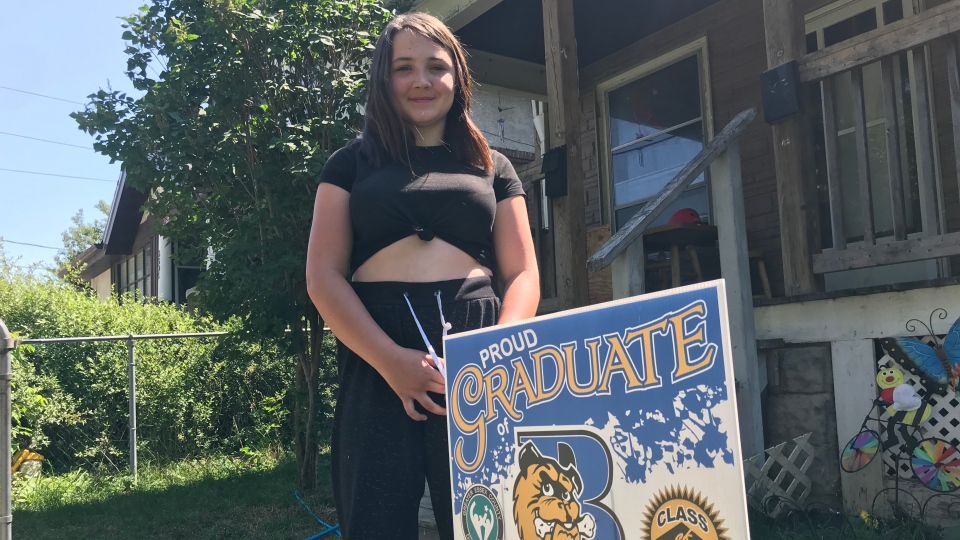 “We want to still have our students feel like they can have that experience,” says Douglas. “It is nice to just to safely say hi from a distance and just say good job.”

“The best way we can do it to celebrate this is to add those personal touches,” adds Mattina. “And making sure these kids have the proper send off into what is going to be a new world for them and hopefully a really bright future.”

At the Catholic Board, some schools are doing drive-thru ceremonies on top of virtual ceremonies.

“It’s the final hurrah in terms of what’s been a really rewarding experience for them,” notes Luigi Baggio, the principal at F.J. Brennan.

The east end Catholic school is giving students the contents of their lockers, a graduation gift bag complete with cap and tassels and a final goodbye from staff, administrators and staff.

“This the highlight for any administrator,” Baggio says. “We started together here four years ago, so personally, on a personal note, this is exceptionally special.”