Matthew Giancola, Benjamin Danyluk, Drew Dilkens and Chris Holt took part in Windsor's first mayoral election debate Thursday, as the candidates continue their push to voters ahead of the Oct. 24 vote for the mayor's seat.

The debate lasted one hour and did not feature Aaron Day, Ernie Lamont and Louis Vaupotic. All mayoral candidates were invited but had to meet a prior deadline before their attendance was confirmed.

The opening question asked candidates how they would tackle homelessness, addiction and mental health issues in Windsor.

Dilkens was quick to point out these problems are being seen in other parts of the world and are not exclusive to Windsor, before touting his record.

"The City of Windsor holds the national record — number one in Canada — for getting people from homelessness into housing," said Dilkens, pointing to the Meadowbrook affordable housing development, the $8-million purchase of a downtown hotel for women and families experiencing homelessness and the H4 hub at Windsor Water World, among others.

"We have been doing a lot. We are committed to do more and we recognize the problem on our streets."

Holt responded by pointing out much of that work was made possible due to council as a whole, before pledging to hire eight new outreach and mental health workers who would work in tandem with police.

He added while Windsor does rank high for moving people into housing, many of them end up back on the streets within six months. It's for this reason, he said, that a vote for Holt would result in 25,000 new units built in Windsor within 10 years.

"We need to push forward with that because we can't embrace the status quo on this ... We need good vision and plans to actually make this happen," said Holt.

Dilkens rebutted, saying outreach workers do not get to the root of the homelessness problem. 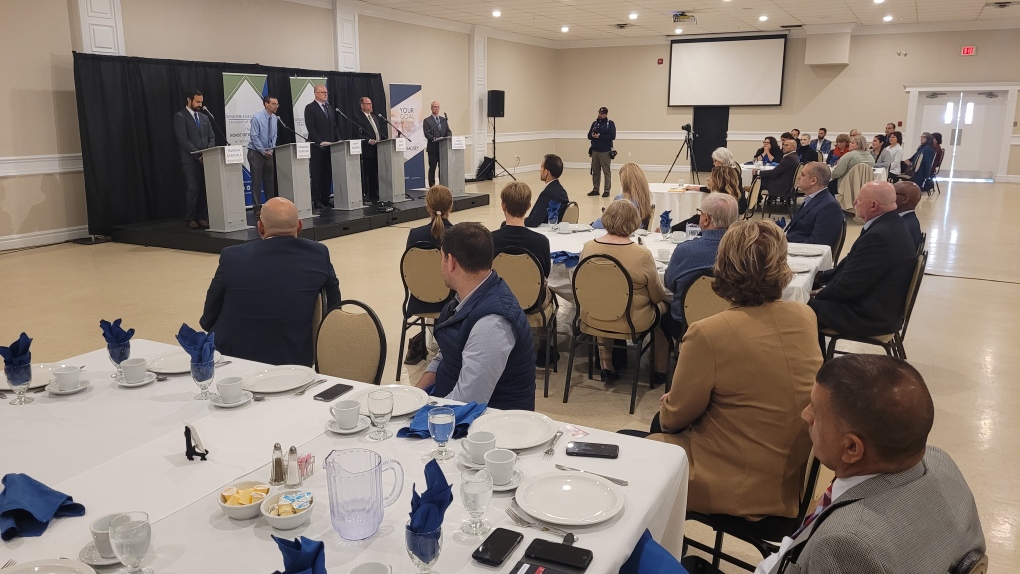 Windsor mayoral candidates Matthew Giancola, Benjamin Danyluk, Drew Dilkens and Chris Holt square off in a debate at the Serbian Centre on Sept. 29, 2022. The debate was hosted by the Windsor-Essex Regional Chamber of Commerce. (Sanjay Maru/CTV News Windsor)

"What we need is a 24/7 drop-off point for police and EMS to bring people who are suffering from mental health and addiction issues so they can get the treatment they need," said Dilkens, adding police would be released back to their normal duties within 30 minutes.

In response, Holt said outreach workers are just "an intricate ingredient" to a much bigger recipe and he would work to address the root causes of Windsor's homelessness crisis if elected.

Giancola is calling for more safe consumption sites spread out across Windsor so individuals who require services are not concentrated in the downtown core.

Danyluk is proposing the city turn its abandoned schools into community housing and sites for drug rehabiliation programming.

The second question asked candidates to explain how they would support the development of Windsor's acute care hospital on County Road 42.

"You can't trust Chris Holt to fight for the hospital at Queen's Park since he's never supported it from the beginning. Chris Holt, if he gets his way, will set this community back at least five to 10 years," said Dilkens.

Holt repeated his pledge that, despite originally opposing the location over issues which he said "have still yet to be addressed," he will work to move the hospital project forward if he becomes mayor.

"We know why this issue is being trotted out day after day. It's a wedge issue," said Holt, adding when he put forward a motion to analyze the financial impact of the new hospital, Dilkens voted against it.

"We need to have the discussions around this hospital because it's happening. Shovels are in the ground ... We need to know the full costs, unlike the desires of my opponent."

Dilkens pointed to his 2018 mayoral address when he committed to making economic diversification his top priority for the city at the time, before touting the announcement of the NextStar electric vehicle battery factory and the surrounding investments in Windsor that followed.

"I am constantly pushing locally, nationally and internationally for my community to deliver jobs and to diversify our economy. Moving forward, we're going to continue to implement the Windsor Works plan," said Dilkens, adding the plan has more than 40 recommendations and there's "more work to do" to accomplish them.

"We have to get ready for the next economic development opportunity. That is an industrial park in the Sandwich South lands. It will take a number of years to from start to finish. But we have to start now if we want to be ready for the next investment in our community."

Holt again pointed out those investments were made possible due to the work of all council members — but Dilkens responding by saying it's him who has been "negotiating and bringing these deals back."

"It takes one person," said Dilkens.

For Holt, more companies will bring their employees to Windsor if the city improves its "quality of life" through investments in public transit and business improvement associations.

"They're the ones who make our neighborhoods better. They are the ones that are going to be attracting the next NextStar energy bid," said Holt.

In regard to the fourth question on downtown revitalization and safety, Holt said while one part of the solution is to increase investments in mental health and addicition supports, the city needs to work toward increasing the downtown population.

"More eyes on the street is more safety and security," said Holt.

Dilkens responded by saying a plan is already in motion, pointing to council's approval of 30 Community Improvement Plan applications in the last five years "worth about 15 million dollars in downtown Windsor alone."

During Holt's remarks, he said residents need to keep in mind downtown is a neighbourhood.

"There's tens of thousands of people who actually live work and play downtown ... It's not a tourist attraction," said Holt.

"Adding a trolley car to the waterfront is not going to improve the safety and security and the livability of our downtown ... It requires the same kind of investment that we give other neighborhoods."

One of the most contentious questions was the fifth surrounding transit. Dilkens pointed to council's approval of the Transit Master Plan, the 518-X route being made permanent and the addition of new routes which connect Windsor to other parts of Essex County.

Dilkens also stood behind the city's decision to shut down its transit system in the early days of the pandemic.

"Our focus shifted from things like parks and arenas to organizing vaccination clinics and isolation centers," said Dilkens.

"To continue to push forward with investments in transit ... I still think today was a terrible business decision."

Dilkens points to the decision as proof of his ability to "adjust and to adapt and to pivot when required."

"I get that leadership is about balance and making difficult choices ... My opponent [Holt] doesn't have the capacity for that kind of adaptive thinking," said Dilkens.

Holt responded by saying Windsor was the "only city in North America to shut down our transit system during the pandemic."

"He called investment in the next step of our public transportation master plan the worst business decision he's ever heard of. He said that because residents can access anything they want, as long as they have cars, as long as they can afford two-dollars a litre of fuel," said Holt.

During the rebuttal period, Dilkens took a jab at Holt's promise to fully implement the Transit Master Plan which includes the construction of a new garage which, according to Dilkens, costs $300 million.

"Three thousand dollars per household to build a garage that will not improve service for one single resident in the City of Windsor," said Dilkens.

"We are the automobility capital of Canada. I am proud of that. I thought that a fourth generation auto worker would be proud of our auto roots as well. As long as we make great cars, I will continue to make sure you can drive on these roads."

Holt responded by saying Dilkens, during budget deliberations, did not support the 418X transit route — which would have provided east-west express access along Tecumseh Road to the St. Denis Centre at the University of Windsor — "but approved waterslides at Adventure Bay."

"He cares more about waterslide riders that saw zero usage, but uses that justification to kill transit at the most important time that we had in our history," said Holt.

A sixth question surrounding electrification resulted in Dilkens pointing again to the Windsor Works plan and the supply chain surrounding the EV battery pant, while Holt said he has been "at the forefront of climate change adaptation and mitigation" during his time on council.

The debate was held at the Serbian Centre of Windsor and hosted by the Windsor-Essex Regional Chamber of Commerce.