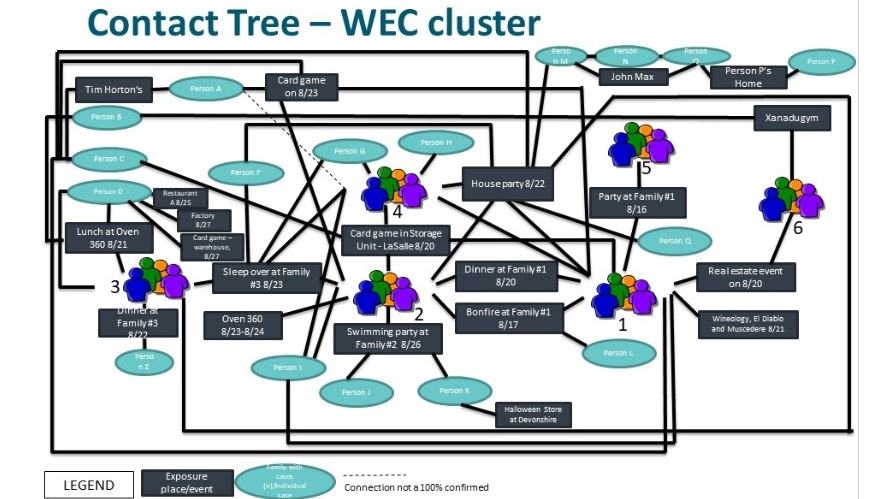 The contact tree for the cluster of COVID-19 cases in Windsor-Essex. (Courtesy WECHU)

WINDSOR, ONT. -- The Windsor-Essex County Health Unit says a community cluster of COVID-19 that began with one “innocent party” has now reached 37 cases.

When the health unit first released details of the cluster last week, the number of cases was 31. Now there are 37 people with the virus in the cluster.

WECHU says 12 cases have been discharged and there have been no deaths associated with cluster.

Medical officer of health Dr. Wajid Ahmed says it started with an event with “Family A” on Aug. 16.

The youngest age in the cluster is 14 and the oldest is 77.

Ahmed says he is concerned about the age group involved, since the majority of the cases are between 14 and 19 and school is starting this week.

Ahmed says 81 per cent of the cases are from Windsor. Some of the events and exposure locations where people visited are in parts of Essex County.

The earliest symptom onset date was Aug. 20 and the last case was reported Sept. 3.

Ahmed says these events tend to lead to people getting upset and stigmatization about some of the people who are involved.

“That is not the public health goal or the public health’s message that we want to share,” says Ahmed. “Obviously there is a certain level of responsibility that we expect from every community member, but as part of reducing that stigma. It’s no one’s fault, it’s everyone’s fault when you are part of that group and when you engaged in these type of activities and not following the public health guidelines.”

The recommended social circle is 10 people. If outside of the social circle, people are instructed to keep a two-metre physical distance and wear masks.

“The critical piece is reduce the number of close contacts,” adds Ahmed.