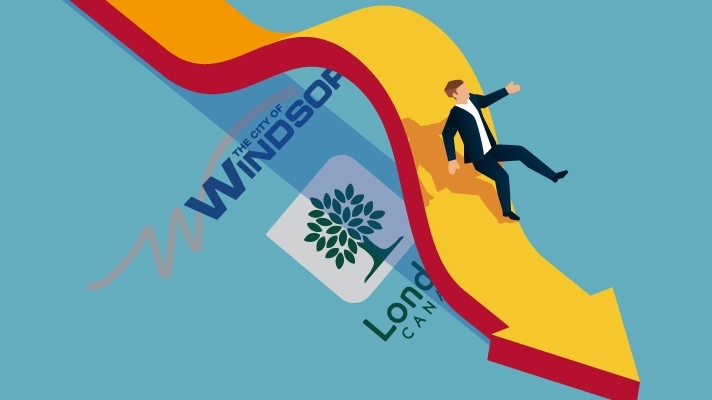 The logo for a study about Economic Performance in Ontario CMAs: A National Comparative Perspective. (Courtesy The Fraser Institute)

WINDSOR, ONT. -- Windsor’s median household income ranking has dropped significantly, according to a new study by the Fraser Institute.

Windsor went from having the 10th highest median household income to 25th.

“The numbers tell a clear story. Southwestern Ontario, especially the cities further away from Toronto like London and Windsor, have suffered enormous economic pain,” said Ben Eisen, a senior fellow with the Fraser Institute and co-author of Economic Performance in Ontario CMAs: A National Comparative Perspective.

Of the 36 metropolitan cities covered by Statistics Canada, Windsor experienced the largest drop in its ranking for median household income, falling from 10th to 25th between the 2005 and 2015 Censuses (the last year of available data).

Indeed, median household income in Windsor over the period actually fell by 3.1 per cent compared to the national average that increased by 13.0 per cent.

London experienced the second largest decline in its ranking of any city: falling from 15th to 27th. Median household income only grew by 2.0 per cent between 2005 and 2015.

The study showed even cities closer to the GTA also experienced declines in their comparative median household income, but their declines were less pronounced than London and Windsor.

The study also examines annual job growth performance from 2000-2019. The results reinforce the weak comparative performance of southwestern Ontario relative to other parts of the province. While total employment in Ontario increased by 25.9 per cent from 2001 to 2019, that figure was just 9.1 per cent in London and 9.4 per cent in Windsor.

“If Southwestern Ontario were its own province, it would the 5th largest in Canada at approximately 2 million people,” Eisen said. “The real pain the people in the region are experiencing is one of the most important economic challenges in Canada and it doesn’t get nearly as much attention as it deserves.”