A Windsor couple is upset after having to remove five bird feeders from their front yard or face penalty.

Robert and Dawna Lajoie say in this time of inflation and COVID, they enjoy watching the birds at their living room window from their west Windsor home on Matchette Road.

“We were devastated,” the couple says. “We’re on ODSP (Ontario Disability Support Program) so we don't get a lot of entertainment time, especially with the economy the way it is. It was relaxing for us.”

Robert says he’s been feeding birds for 22 years and was surprised when a neighbour told him a complaint would be filed with the city if they weren’t relocated to the backyard.

“I was shocked,” he says. “Like, these are supposed to be friends!”

The Lajoies say they refused to move the bird feeders because there aren’t any windows to watch from that side of the house.

Robert notes he suffers from depression and anxiety, claiming the bird feeders help.

“I’m medication refractive, which means I can't take the pills,” Lajoie explains. “So there's a picture window here and we had the bird feeders out here and you wouldn't believe what that does to make you feel on a bad day.”

The pair tells CTV News a City of Windsor bylaw officer came to their property earlier this month notifying them a complaint had been made that the feeders were attracting rodents and creating a mess on the ground, and from above. 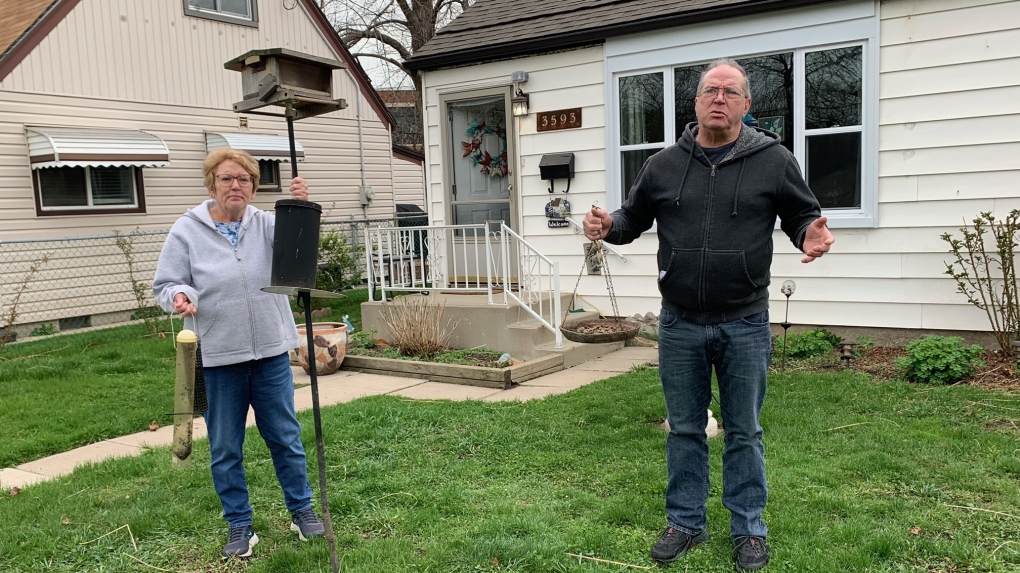 “We pride ourselves on taking care of wildlife, you know,” Lajoie says. “We have an opossum, we have had the skunks living under our porch which is the best thing for taking care of rodents.”

“She was an extremely nice woman. I couldn't believe how nice she was. She was apologetic. She kind of sounded like she didn't understand why,” he says.

CTV News reached out to the neighbour who issued the complaint, but they did not wish to comment.

The couple says they’ll leave the bird feeders alone for now, noting they were relieved they didn’t receive a fine.

“If we found a bird feeder that you could put seed in and it didn't drop to the ground, that would be fine,” Lajoie says. “But there's no such thing.”

Licence commissioner Craig Robertson confirms a bylaw passed in 2021 as a way to reduce wildlife and rodents, like rats.

“Those that want to feed songbirds, you are allowed to under the bylaw,” Robertson says. “But that food needs to be in an enclosed container so that wildlife and other rodents can't access it.”

Robertson explains if bird food ends up spilling onto the ground it needs to be cleaned up by property owners.

“You can't just sprinkle food on the ground,” he says. “You can't have bowls or containers of food in the yard. If that is the case and we get a complaint, our bylaw enforcement officers will go out and assess the situation.”

Robertson says repeat offenders with feeders that can’t be maintained could face a fine up to $5,000 if the property owner isn’t complying with subsequent visits.

“At this point, we haven't laid any fines. Generally we've been able to gain compliance and the property owners have worked with us,” Robertson adds. “We're quite happy that we haven't had to go to court on this.”

Meantime, the Lajoies say they can’t afford to move, and hope they can speak with city officials about allowing exceptions to the rule for responsible home owners, noting they intend to build a new front yard fence.

“We make sure garbage cans are covered. We made sure that we fixed our compost so they couldn't get in there,” Dawna adds. “Good fences make better neighbours.”

A fire ripped through a packed Coptic Orthodox church during morning services in Egypt's capital on Sunday, quickly filling it with thick black smoke and killing 41 worshippers, including at least 10 children. Fourteen people were injured.

Republicans stepped up calls on Sunday for the release of an FBI affidavit showing the underlying justification for its seizure of documents at former President Donald Trump's Mar-a-Lago home.

Weapon in deadly 'Rust' film set shooting could not be fired without pulling the trigger, FBI forensic testing finds

FBI testing of the gun used in the fatal shooting on the movie set of 'Rust' found that the weapon handled by actor Alec Baldwin could not be fired without pulling the trigger while the gun was cocked, according to a newly released forensics report.

'Fanaticism is a danger to free expression everywhere': Ignatieff on Rushdie attack

After Indian-born British novelist Salman Rushdie was attacked during a writing conference in western New York on Friday, current and former Canadian politicians are weighing in on what such attacks mean for freedom of expression and thought.

Salman Rushdie 'on the road to recovery,' agent says

Salman Rushdie is 'on the road to recovery,' his agent confirmed Sunday, two days after the author of 'The Satanic Verses' suffered serious injuries in a stabbing at a lecture in upstate New York.

Norway puts down Freya the walrus that drew Oslo crowds

Authorities in Norway said Sunday they have euthanized a walrus that had drawn crowds of spectators in the Oslo Fjord after concluding that it posed a risk to humans.