WINDSOR, ONT. -- Windsor snow plows were out in full force for the area’s first significant snowfall of the season.

“Seventeen contractor routes and four routes that are controlled by city staff,” says Dwayne Dawson, executive director of operations at the City of Windsor.

Roads appeared to be wet and slushy, making for better driving conditions compared to icy conditions.

“We’re in really good shape with the collectors and E.C Row at this time,” says Dawson.

City plows were out until 6 p.m. Tuesday night, and staff will continue to monitor the situation overnight.

“Accumulated snow on the streets did not reach the four inches or 10 centimetres we probably ended up with about two inches on the side streets so won’t be entering into residentials at this time,” says Dawson.

Windsor police say there were few incidents involving sliding vehicles but no major collisions due to the weather.

A good reminder that it’s not too late for winter tires.

“That first snowfall we do expect a lot of people coming in ‘oh we gotta get snow tires put on’”, says Marc Thibert, service manager at Firestone Kipping Tire and Automotive

He says the rush to grab fresh rubber this time of year is nothing new.

“We don’t get very much snow but the cold weather does affect the outcome of your tires too.”

Due to the areas geographic location, Thibert says it’s difficult to stock up on snow tires around the holidays.

“It’s late in the season for most of Canada. We are booking for Friday. I do have to go with some other brands,” Thibert tells CTV Windsor.

“Everybody’s coming in at once so it gets pretty busy.” 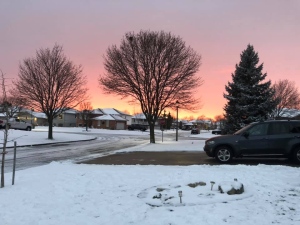 IN PICTURES: Snow Day in Windsor-Essex