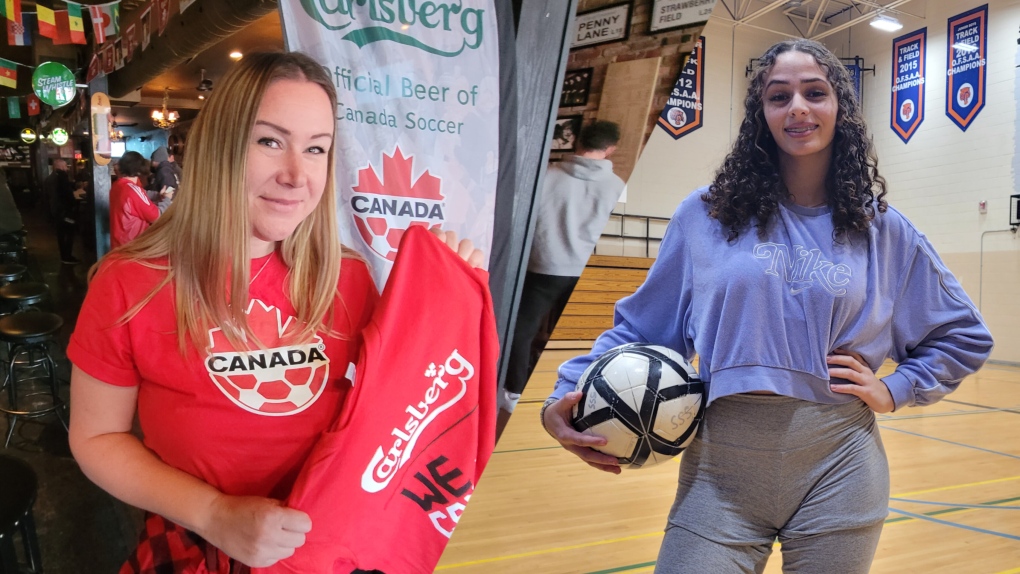 Despite the men's Canadian soccer team going winless in this year's FIFA World Cup tournament, fans who watched Team Canada take on Morocco from The Manchester Pub say this year's tournament has transcended beyond wins and losses.

Natalie Fantinic — who has played on the St. Clair College women's soccer team — was among those watching Thursday's game from the pub. She said, prior to this year's World Cup, she couldn't convince her children to kick a soccer ball with her.

"After our first game against Belgium, I had a couple of kids and the whole neighborhood playing at the park," said Fantinic.

"It's exciting. I think for everybody in Canada, this has made a difference."

Following earlier losses to Belgium and Croatia, the Canadian team was already ineligible to advance in the World Cup, regardless of the result against Morocco. Canada dropped Thursday's game against Morocco 2-1.

While The Manchester was at standing room only for Team Canada's first two World Cup games, there was much more room to move around Thursday as only the most diehard Canadian soccer fans left their homes to watch Canada's battle against Morocco at the downtown pub.

"There definitely is soccer fever in the air. I think that kids who didn't even play soccer now want to get on a team which is amazing," she said.

"I think it brings more attention to soccer. Soccer is a sport where kids can lose the thought of other stresses and just be free, play, work out and be healthy."

Faddoul, who will be heading to the U.S. to play soccer at the varsity level after graduating from Sandwich Secondary School in LaSalle, added the previous successes of the Canadian women's national team — along with the men's team making its first appearance at the World Cup in 36 years — can inspire a new generation of soccer upstarts.

"It's great to see that there's a higher level in Canada. There's places where I can strive to be. Not only me, but other young boys and girls."

Thomas Mavrantzas, who also watched Canada take on Morocco from The Manchester pub, said he's hopeful for the future and is proud to have seen his country "compete on a world stage."

"We already have young players that will be in their prime for the next World Cup," he said.

Mavrantzas added he always watches the World Cup — but this year's tournament marked the first with a team he could actually get behind with his full support.

"It's a different feeling," he added. "I really wish we could have went further."

The federal Liberals are withdrawing an amendment to their guns bill that introduced a controversial new definition of an assault-style weapon. The amendment would have defined what kind of firearms should be banned in Canada and added dozens of new semi-automatic rifles and shotguns to the list.

The Department of National Defence says Canada is working with the United States to protect sensitive information from foreign intelligence threats after a high-altitude surveillance balloon was detected.

Hundreds of customers who scan QR codes for restaurant menus across Canada are being surprised by secret menus instead, revealing the hidden costs behind the food they eat.

Most of Ontario is under an extreme cold warning as a blast of Arctic air delivers biting wind chills.

Could the fungal outbreak in The Last of Us happen for real?

The post-apocalyptic TV adaptation of the video game The Last of Us has some wondering about the real-life possibility of a global pandemic caused by fungus, and one expert says it’s not a concept to dismiss.

Canada's egg industry appears to be quietly sidestepping widespread shortages and wildly spiking prices affecting other countries, and some say supply management is to thank.

British Columbia Premier David Eby says he's going into next week's health-care meeting between the premiers and prime minister with an open mind — and without a red line dollar ask for the federal government.

Big tech companies that offer online streaming services could soon be required to contribute to Canadian content as a controversial Liberal bill gets one step closer to becoming law.