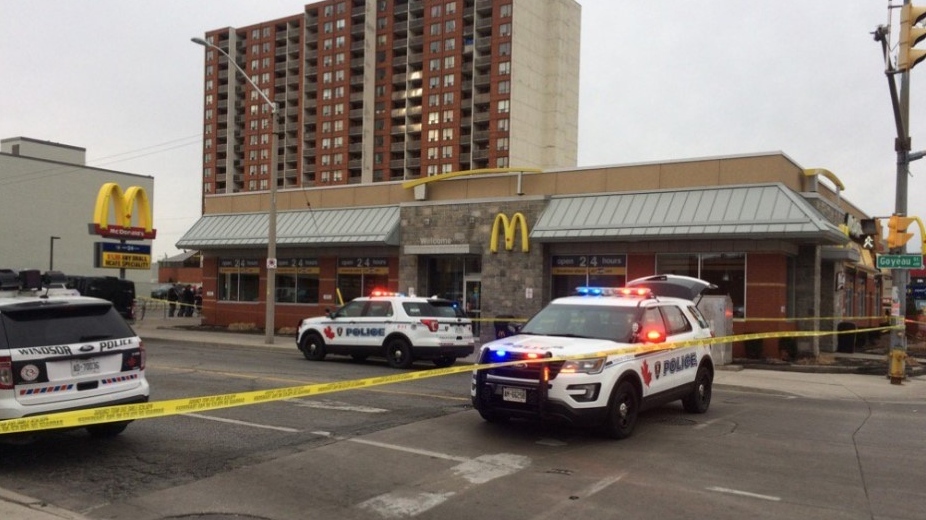 The McDonalds on Wyandotte and Goyeau is on lockdown and the street around it is taped off on Wednesday, March 21, 2018. (Michelle Maluske / CTV Windsor)

A Windsor family says they are impressed with the recommendations after an inquest into the death of Matthew Mahoney, who died after a confrontation with police.

Michael Mahoney feels the five-person jury that oversaw the inquest into the death of his brother Matthew went above and beyond.

The recommendations came after 10 days of testimony and submissions.

Matthew Mahoney, who had been diagnosed with schizophrenia, was 33 years old when he was shot and killed by two Windsor police officers on the morning of March 21, 2018.

The jury determined Matthew’s death was homicide, which the Mahoney family agree with. Michael Mahoney says testimony showed his brother made three attempts to evade police before the incident happened.

“To suggest this was suicide, someone who was trying to evade police and get away from them it just didn’t make any sense,” says Michael Mahoney.

A recommendation the family deemed thoughtful called for the creation of mental health advocate role that would build a bridge between a person’s care team and family members.

“We talked a lot in this inquest about the number of times we tried to provide information to doctors and social workers and other members of Matthew’s care team and we were never able to get through to anyone,” says Michael Mahoney.

“Give us some time to look at them and see how they would be able to be rolled out,”Health Minister Sylvia Jones said of the recommendations while in Essex Monday afternoon. “Have no doubt we are committed to making improvements in mental health and addiction services in Ontario.

“We've been having these discussions and I just want to publicly state today that firstly I think the recommendations make sense,” he said. “Secondly, we will review them very carefully and not only the Mahoney family but the community at large can expect a response to them in a very positive way.

Michael Mahoney would like to see the nine recommendations made by the jury implemented and feels it would be a shame if the agencies involved didn’t make any changes.

“There was a lot to learn from this case. Some small changes that could make a huge difference in the future and some bigger changes that would require policy changes,” says Michael Mahoney.

Michael says his brother’s personality was “larger than life” and will never forget his smile and sense of humour.

“He was a gentle person despite how he died and I hope people remember that these cases are complicated and it’s important not to forget the person in the middle of them,” says Michael Mahoney.