Via Italia Alley Safety Project to light up alleyways

WINDSOR, ONT -- The BIA in Via Italia is teaming up with Windsor Police and the City of Windsor to make Windsor’s Little Italy brighter.

“We’re looking to light up the alleyways and keep them safe,” says Via Italia BIA president, Fil Rocca.

The ‘Via Italia Alley Safety Project’ will see the installation of 47 new alley lights.

“Clean up and make our alleys safe and secure for the benefit for not only the businesses but also the residents who live in the Erie street neighborhood,” says Ward 4 councillor, Chris Holt.

“It’s so close to our main street, we are talking about a couple of hundred feet if that. So it is very crucial to keep the alleyways lit at nighttime,” says Rocca.

“We’re excited to see our neighbourhood get that opportunity to have lights for safety. Especially eating on Erie street, if parking lots are in the back it’s scary,” says Via Italia resident, Janet Masse. 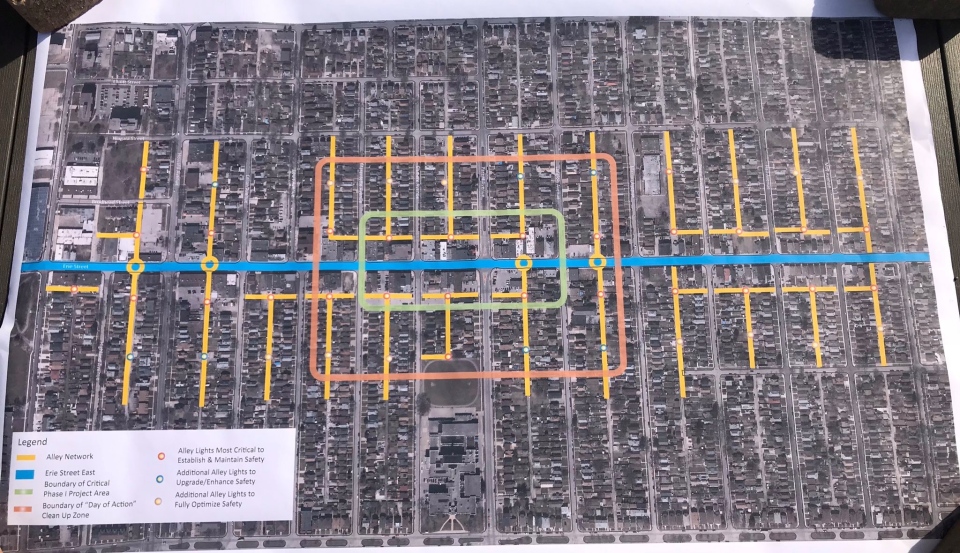 The cost of the project is estimated between $70,000 to $100,000. Ward 4 city councilor, Chris Holt says the first phase of the installation of six alley lights will begin this fall.

“There’s probably $50,000 to $60,000 dollars in ward funds that are going to be going to this. Lights aren’t cheap. The BIA is also taking on the operational expenses for the long term as well. So the BIA has agreed to pay for the maintenance and hydro use of these going forward,” says Holt.

Windsor Police say the lights will give a daytime feel in nightime conditions, creating a safer environment for residents, businesses and visitors.

“We want bring them back to a use that is more functional and safe. Adding the lights, cleaning them up, getting them used more lawfully takes away from crime and disorder. Which they are more so physically suited for right now,” says Windsor Police Director of Planning, Barry Horrobin.

Community partners tell CTV news before the lights can be installed, the alleys first need to be cleared.

Via Italia BIA are asking for volunteers to join a group cleanup Saturday, October 24 from 10 a.m. until 2 p.m.

Interested residents are asked to register at 9:30 a.m. at Mezzo Ristorante.