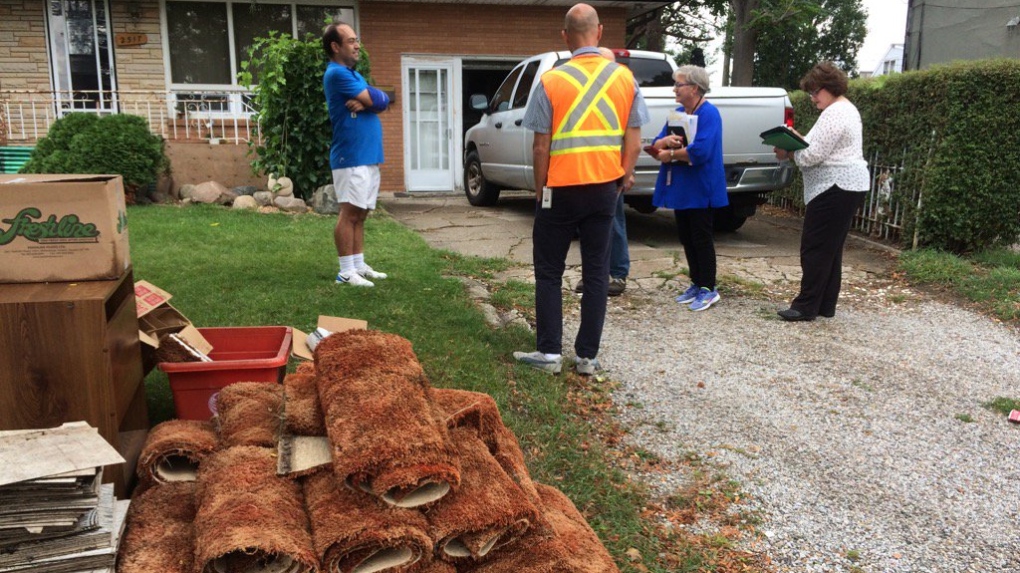 Staff members from the Ministry of Municipal Affairs on Aubin are talking to frustrated residents about flood damage in Windsor, Ont., on Tuesday, Sept. 5, 2017. (Michelle Maluske / CTV Windsor)

Two teams of staff members from the Ontario Ministry of Municipal Affairs are in Windsor, surveying the damage from last week’s storms.

Mark Cripps, a spokesperson with the ministry, says the crews are trying to make an estimate of the costs to repair to “pre disaster conditions.”

He adds they are working with city members, who are guiding the ministry staff through the city, using the map of the hardest hit areas.

If Windsor residents qualify, it will be to get their homes back to living condition and wouldn’t replace unusual content losses like, for instance, any high end collections destroyed in the flood.

He points out the program was reformed in 2015, to remove the condition that municipalities have to raise money first, before the province will allow money to flow to residents.

For residents whose homes have been damaged, Cripps has two key recommendations.  He says to save all receipts for cleanup or restoration work in one place to make claims go faster. He also recommends residents contact their insurance provider to make sure they understand what is covered and what is not.

Cripps expects the crews will be in Windsor all day Tuesday, and will make a recommendation “by weeks end”, to Minister Bill Mauro, who he says can make a decision about whether or not Windsor qualifies “quickly”.

Cripps adds he’s had a lot of experience with flood areas and says the new program has “been put to the test” this year, with flooding in eastern, midwestern and now southwestern Ontario.