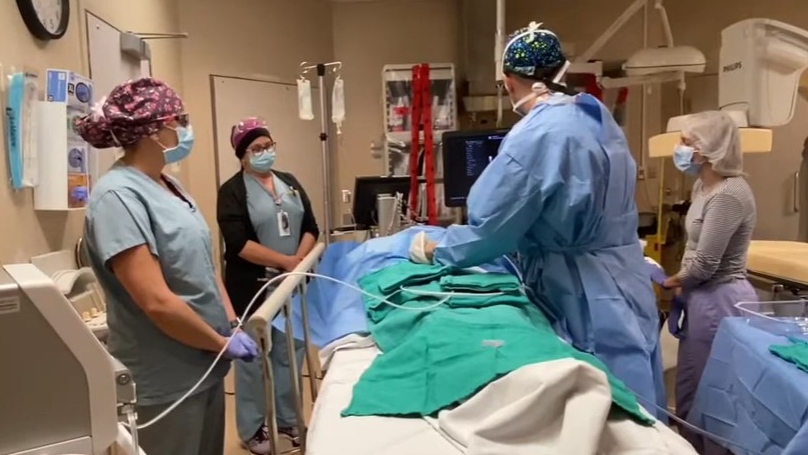 He says he’s excited it has arrived in Windsor to the benefit of patients as it is minimally invasive, the patient can be released from the hospital within a few hours of the procedure and it is less painful.

“Basically the patient comes in and gets discharged within a few hours,” says Rochon. “It is much better than the alternative of going for open surgery.”

Two procedures were performed on Friday, Oct. 16 and the third, captured on video, was carried out Monday morning, Oct. 19 on a patient’s liver.

In the past, older technology called Radiofrequency Ablation was used to treat tumours, but Microwave Ablation burns hotter and faster, therefore the procedure takes less time and most importantly, it is less painful for the patient.

While the patient is under conscious sedation, a small two millimetre incision is made in the skin and a probe, similar to a 12-inch straight wire, is inserted into the tumour for four to six minutes.

WRH says it’s a far cry from the older technology that would often require three probes and take 20 minutes, where patients could potentially move making it more difficult for the doctor to “hit a moving target” to kill the cancer.

“This basically leads to better outcomes overall for the patient in terms of treatment of cancer and in terms of the experience going through the procedure as well,” says Rochon.

The technology can be used for a small tumour discovered in a liver or kidney and in an area that does not pose a risk to any nearby vital organs.

“We are burning a little zone of normal tissue around the tumour, to make sure we have got all the tumour. If it is close to a vital structure, then this isn’t a safe procedure,” he says. Despite this, the ablation still spares more normal tissue surrounding kidney or liver tissue than surgery.

Alongside the doctor and patient is the technologist and Friday morning, it was Erin Balyo, Lead Technologist in Interventional Radiology who at one point, reached under the blanket during the burn to hold the patient’s hand.

“You know they are alone, they are scared, and you think if that is your family member, your mom, dad or husband on the table, you would want to have someone next to them making sure that it is ok, and as technologists, we know exactly when that burn is going to happen,” says Balyo. “We know that it is the most important part [of the procedure] and that they are going to feel something. Whether they will remember it or not, you are there for them and just make sure they know someone is next to them.”

Balyo says using the older machines and technology, staff would be with the patient for 20 minutes burning the cancer, which is a long time to be in pain.

“Radiology doesn’t just do diagnoses. We have been curing cancer for years and this new technology shortens procedure time and is less painful than older methods,” says Dhanoa.