Travel-related measles case confirmed in Toronto, others may have been exposed 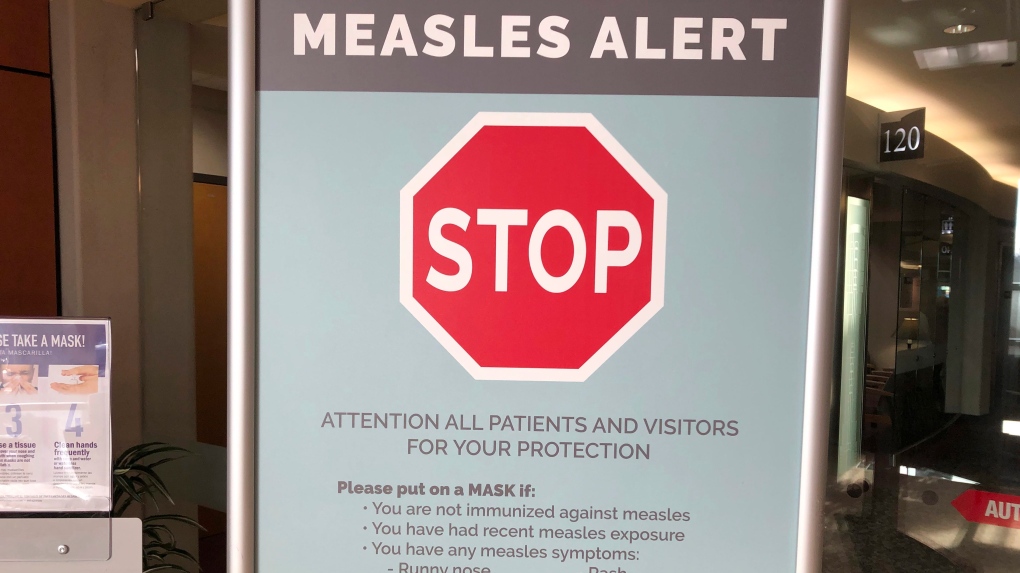 In this Jan. 30, 2019 file photo signs posted at The Vancouver Clinic in Vancouver, Wash., warn patients and visitors of a measles outbreak. (AP Photo/Gillian Flaccus,File)

Toronto Public Health is investigating a confirmed case of measles and warning that some people may have been exposed to the highly contagious virus.

Associate medical officer of health Dr. Vinita Dubey says the case involves an unvaccinated infant who recently returned to Canada with its family from a trip abroad.

The parents sought medical care for the baby at two doctor's offices and a Toronto hospital's emergency department, potentially exposing staff and patients in those locations to the disease.

In a communique, Toronto Public Health warned physicians to be alert for patients presenting with key symptoms of measles, including high fever, cough, red eyes and a rash.

Dubey says anyone who may have been exposed should watch for signs and symptoms of measles. If symptoms develop, the individual should call before going to a health clinic to prevent possible exposure to others.

"We know that measles is circulating in Canada and beyond," said Dubey, referring in part to an outbreak in B.C. that also began with a travel-related case.

"And we expect to see travel-related cases as March break is approaching," she said, adding that anyone six months of age or older should be inoculated with the measles, mumps and rubella vaccine before travelling.