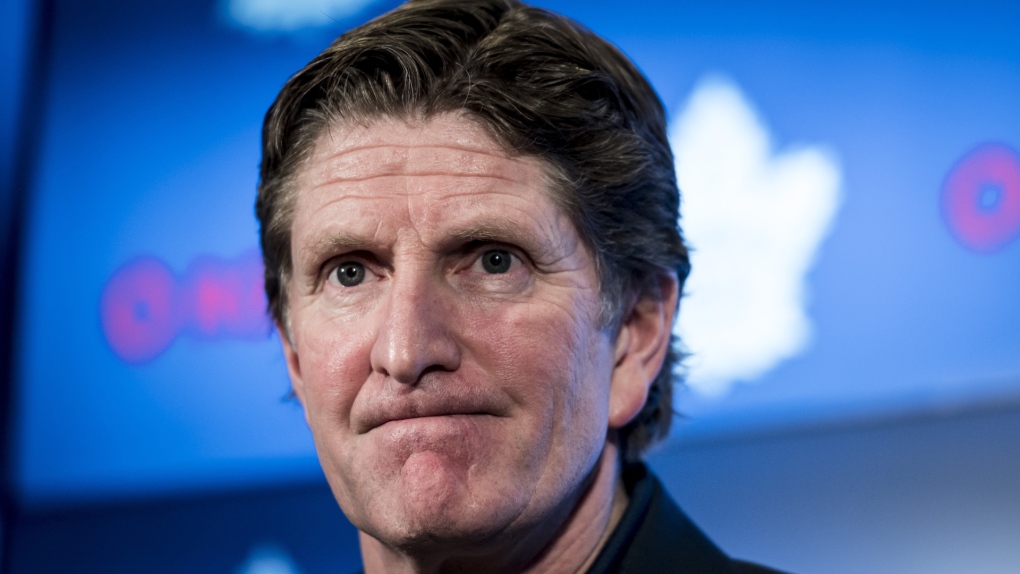 Toronto Maple Leafs Head Coach Mike Babcock speaks to reporters after a locker clean out at the Scotiabank Arena in Toronto, on Thursday, April 25, 2019. THE CANADIAN PRESS/Christopher Katsarov

And since he helped bring Mike Babcock to Toronto in the spring of 2015, the president of the Maple Leafs felt it was only right he be there when the axe fell on his head coach.

Sitting uncomfortably outside the playoff picture, the scuffling Leafs fired Babcock on Wednesday and replaced him with Sheldon Keefe.

Shanahan flew to Arizona where Toronto -- a team that started the season with Stanley Cup aspirations, but hasn't come close to living up to those lofty expectations -- is preparing to meet the Coyotes on Thursday to deliver the news alongside general manager Kyle Dubas.

"It wasn't an easy conversation to have and it wasn't pleasant," Shanahan told reporters at the team's hotel in suburban Scottsdale. "But it was what we felt was important for the club.

"Once you realize there's something you should do, and have to do, then it's best to act."

Babcock had a record of 9-10-4 in 2019-20 for the Leafs, who are 0-5-1 in their last six games, including five straight losses in regulation, and currently sit two points back of the second wild-card spot in the Eastern Conference.

"It's just something that you watch and you've been monitoring for a while," Shanahan said of the decision. "Kyle and I are in constant communication. It really just came down to the last couple of weeks and it got to the point where we spoke in the last 48 hours.

"I just felt that it was something that needed to be done, and Kyle felt the same way."

Toronto fell 4-2 to the Golden Knights in Vegas on Tuesday after an embarrassing 6-1 defeat Saturday in Pittsburgh. Babcock, who has a career record of 700-418-183, picked up his last victory for the Leafs on Nov. 7.

Hired as part of a massive rebuild, the 56-year-old Babcock went 173-133-45 in his four-plus seasons with Toronto. He joined the Leafs with an impressive resume, having won the Cup with Detroit in 2008 before helping Canada secure back-to-back Olympic gold medals in 2010 and 2014.

After signing the richest coaching contract in NHL history -- one worth US$50 million over eight years -- Babcock got Toronto to the playoffs the last three seasons after the franchise bottomed out in 2015-16, but was unable to advance beyond the first round.

The 39-year-old Keefe, who has a long history with Dubas, was in his fifth season as head coach of the American Hockey League's Toronto Marlies.

Keefe was 199-89-31 with the Marlies and helped secure the franchise's first Calder Cup championship in 2018.

"Our relationship has grown," Keefe said of Dubas in May. "He really opened my eyes to how much there is to learn and how to look at things a little bit differently."

Keefe has coached a number of current Leafs when they were with Marlies.

Toronto's last four in-season coach firings -- Pat Burns, Ron Wilson, Randy Carlyle and now Babcock -- all took place with the team on the road. There were no other changes announced behind the bench, meaning assistants Dave Hakstol and Paul McFarland keep their jobs for now.

Shanahan, Dubas and Keefe are all scheduled to speak with the media Thursday morning.

Toronto, which was never able to ice its full roster because of various injuries to key pieces, was unable to find traction after a summer of change that saw a number of Babcock's trusted veterans leave town as part of a salary cap crunch precipitated by big-money contract extensions handed to Matthews and Marner.

In fact, Toronto's Big 4 forwards chewed up nearly half of the $81.5-million cap, leaving Dubas to try and fill in the roster around the edges with young players and discount veterans.

One of those bargain-bin finds -- 36-year-old centre Jason Spezza -- was scratched on opening night by Babcock, and has watched 10 of the Leafs' 23 games from the press box.

While there's no questioning Babcock's track record, there seemed to be a disconnect between the coach and GM in terms of roster construction and style of play after Dubas took over the top job from Lou Lamoriello in May 2018.

Toronto's lack of attention to detail in the defensive zone the last two seasons and sub-par specialty teams were both troubling aspects Babcock was unable to rectify, even after changing assistants this season.

"We're mistake-prone on defence, the attention to details aren't there," Shanahan said. "The explosive offence that our team was known for has been missing for a while.

The young Leafs surprised many by making the playoffs in 2016-17 before falling to the Washington Capitals in six games. Babcock was unable to get Toronto past the Boston Bruins the last two springs, losing both series in seven games.

Dubas declined to give Babcock a vote of confidence after that defeat, but Shanahan said the pair had a good working relationship.

"It just didn't work out that way."

And for his part, Babcock knew back in September things could get dicey if the season started to go sideways.

"I do, for sure," he said at the start of training camp. "The expectation each and every year should be greater than the previous year if you're going in the right direction."

Now it's up to Keefe to grab the wheel.

This report by The Canadian Press was first published Nov. 20, 2019.