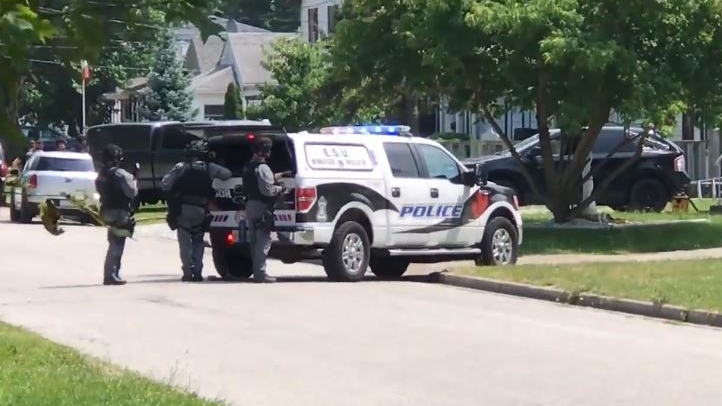 Two men and one woman face a long list of charges after two weapons investigations in two different neighbourhoods in Windsor.

Police say they were first called to the area of Mercer Street and Elliot Street East for a report of shots fired around 1 p.m. on Wednesday.

A number of residents told CTV News that they heard gunfire in the area.

Officers arrived on scene and located what appeared to be damage caused from a gunshot to a home in the 800 block of Mercer Street. They also found shell casings.

The residence was occupied at the time, but police say no one was hurt.

Through investigation, police say they determined that a black Ford F-150, believed to be stolen, was involved in the incident and suspect descriptions were obtained.

That is when police say the investigation led officers to the 2400 block of Arthur Road at about 2 p.m.

A black truck, believed to be the same stolen truck involved in the shooting, was seen in the area and seized by police.

Police also say several people were seen exiting the truck and entering a home, which was contained by officers and the Emergency Services Unit for nearly seven hours.

One of the suspects was located in the 900 block of Ouellette Avenue and arrested without incident.

Matthew Maskery, 34, of Windsor is charged with intentionally discharging a firearm recklessly and occupy a motor vehicle with a firearm.

Danielle Bigelow (AKA Lauzon), a 31 year old woman from Windsor, is charged with possession of a firearm without a licence.

Investigators in the Major Crimes Branch believe this to be a targeted incident.

Residents in both neighbourhoods told CTV Windsor the two homes are “known to police.”