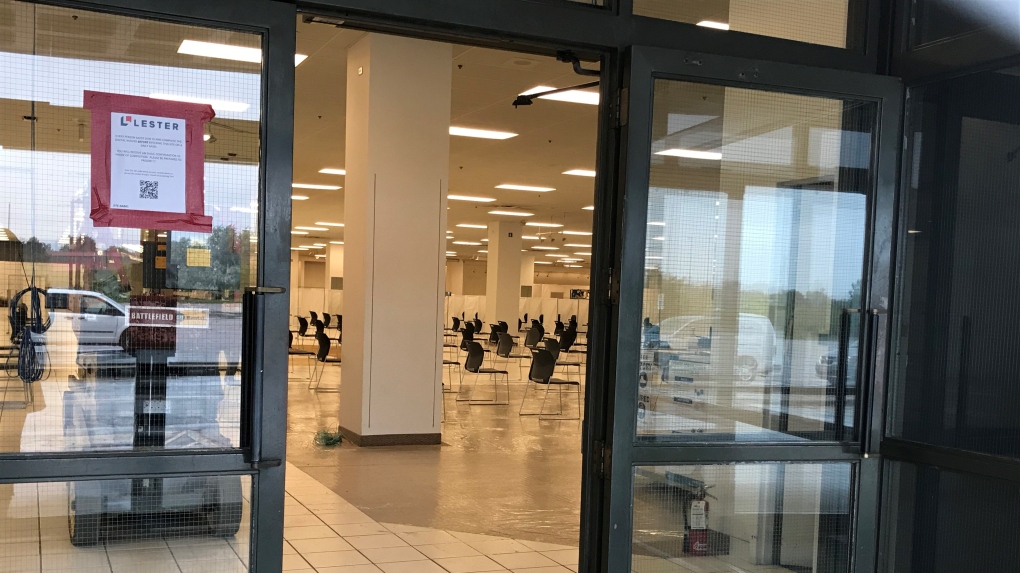 A look inside the former Sears building at Devonshire Mall May 28,2021(Michelle Maluske/CTV Windsor)

WINDSOR, ONT. -- Windsor Regional Hospital confirmed Friday that they are leasing the empty space on the north side of Devonshire Mall to build a mass vaccination clinic.

The new site will open on June 21, and then officials will slowly start to “decant” Windsor Hall and the Sportsplex.

“Our team has been actively in that building, getting it ready for about two months now,” says David Musyj, CEO of Windsor Regional Hospital.

“The goal is to get Devonshire mall up and running by itself pretty much and transitioning some of the equipment over from Windsor Hall or St Clair College.”

He says crews have had to make repairs to the ventilation and heating systems, because the space has been vacant since 2018.

General Manager of Devonshire Mall, Chris Savard says they met with hospital officials within 24 hours of the initial call from David Musyj.

“I asked him (Musyj), would extra space help you move quicker or is it just a supply issue? And he confirmed for me, that it was both,” says Savard.

From there, Savard says the deal came together fairly quickly.

“At one point he (Musyj) said ‘we’ll figure out the amount for square footage’ and we said there will be no charge,” says Savard “This is a way, we and our ownership group can play some role in our getting things moving a little quicker, we’re happy to do it.”

“Hopefully its our last move,” says Musyj “Our hopes were we would hand over the properties to the university and to St Clair College and be pretty much done with the vaccination campaign but that’s not the case.”

The Windsor Hall clinic in downtown Windsor will close on June 19.

Anyone with a pre-booked second dose appointment at Windsor Hall will have their appointments rebooked for the same date and time, at the Devonshire Mall Vaccination Centre.

The Sportsplex clinic at St Clair College will close on July 22.

All other mass vaccination sites will remain open until further notice.

Musyj says they hope to do between three and five thousand inoculations in an eight-hour period once the Devonshire Mall clinic is open.

And he’s hopeful they will be able to close the Devonshire Mall location sometime in late 2021.

“We talked to them about that and we said if we’re in the facility in 2022 then somethings gone wrong,” says Musyj.

The lease for the mall clinic is a symbolic $1, which was also the agreement with St Clair College and the University of Windsor.

Devonshire Mall is owned by Healthcare of Ontario Pension Plan (HOOPP) so Savard says clearing the way for medical purpose was a “natural fit”.

Savard tells CTV News they have multiple offers on the table for the next lessee of the massive space on the north end of the mall, but wouldn’t divulge anymore, saying they hope to make the announcement in early 2022.