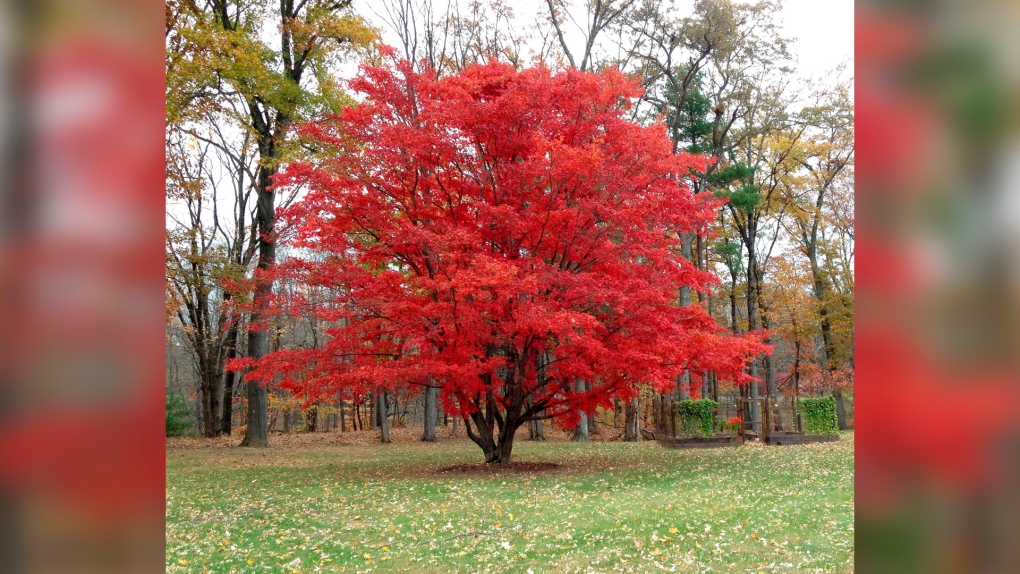 Sugar maples, native to the forests of eastern Canada and northern parts of the Central and Eastern United States, paint the landscape each autumn in fiery shades of yellow, orange and red.

What puts colour into the leaves of the sugar maple, or of any tree?

Green, of course, is from chlorophyll, most welcome in spring and throughout summer, but not our concern now. A leaf has to keep making new chlorophyll in order to stay green, and shorter days, with the sun hanging lower in the sky, trigger leaves to stop producing it, unmasking other pigments lurking there.

The yellows and oranges were there, hidden by the green of chlorophyll. They come from carotenoid pigments, which help chlorophyll do its job of harvesting sunlight to convert into plant energy. We can thank carotenoids for the warm, yellow glow they give to gingko, aspen, hickory and birch leaves.

Tannins are another pigment, actually metabolic wastes, that are hidden earlier in the season by chlorophyll. They give us the subdued browns of fall, notable in some oaks but also enriching the yellow of beeches.

Because leaves harbour carotenoids and tannins all summer long, nothing particular about autumn weather should either intensify or subdue their autumn show. The only glitch could be an early, hard freeze while leaves are still chock full of chlorophyll. In that case, cell workings come to a halt and you're left with frozen green leaves that eventually drop without any colour change.

AND NOW FOR SOME RED AND PURPLE

Autumn colour also has its reds and purples, most evident in red and some sugar maples, Japanese maples, scarlet oak, sourwood and winged euonymous. Those reds and purples come from yet another pigment, anthocyanins.

Anthocyanins do not begin to be formed in leaves until autumn. Exceptions would include trees like Purple Fountain beech and Royal Purple smokebush, whose leaves stay red right from the get-go in spring and remain so all summer.

Anthocyanin formation requires sugars, so anything that you or the weather do to promote sugar accumulation in autumn increases anthocyanin levels in leaves. Ideal weather for anthocyanin formation is warm, sunny days to maximize photosynthesis, and cool, but not frigid, nights to minimize the burning up of accumulated sugar during darkness.

Cloudy, rainy autumn weather results in less red in autumn leaves because less anthocyanin is formed, and any that does form is diluted.

We can ratchet up the reds and purples by making sure that leaves bask in light. Plant a tree where light is adequate and, if necessary, prune it so the branches do not shade each other.

Street lights don't count as light, and actually have a negative effect by disrupting the signal that days are getting shorter and it's time to slow chlorophyll production.

We also can play a role in the autumn show by planting trees genetically programmed for good autumn colour. Among those most colorful trees and shrubs -- which besides those previously mentioned include goldenrain tree, hickory, ironwood, black tupelo and fothergilla -- individuals within each species might pack a bigger wow than others.