It’s been a record breaking two days in the weather department, according to Environment Canada.

Meteorologist David Phillips says Sunday’s severe thunderstorm was the rainiest July 27 on record. A total of 47 millimetres of rain fell within three to four hours – the previous record was registered in 1969, when 42 millimetres fell.

“More than half a month of rain in a few hours,” Phillips says.

Windsor fire crews were called to 480 Vera Place around 6 p.m. for a reported fire in the attic of a house. Investigators determined lightning was the culprit behind the blaze, which caused $85,000 in damage.

No one was home and no injuries are reported.

At the same time, the storm is getting the blame for damage in Tecumseh. According to officials, several homes were struck by lightning, while strong winds downed wires.

Environment Canada has yet to confirm reports of a tornado in the Grand Band area, where utility poles and trees were knocked down during Sunday night's storm.

But agency meteorologist Geoff Coulson says it's possible either a tornado or a burst of damaging wind hit the area last night.

The weather agency is sending a team to the area on Monday to investigate. 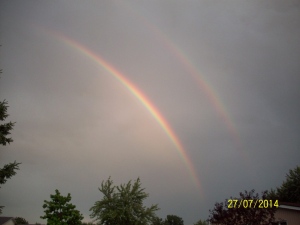 In Pictures: Double rainbow all the way!