Stretch of Highway 3 in Tecumseh buckles again during extreme heat 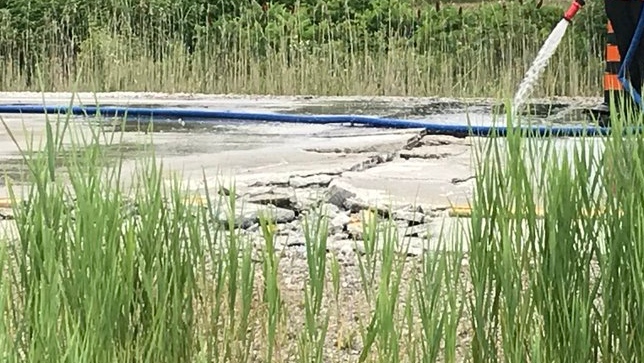 A section of Highway 3 near the border of Tecumseh and Essex has reopened after it was closed for a number of hours Monday night when the road buckled under extreme heat.

This time, buckling happened just west of Manning Road, closing the section from Manning to Malden Road in Maidstone.

It happened around 6 p.m. Monday and crews were out clearing debris and cooling the road off with water about an hour later.

It's the second time the road has buckled this month -- likely due to extreme heat. It's also exactly one year since the westbound lane between County Road 34 and Sexton Side Road buckled in the heat.

In an email to CTV Windsor two weeks ago, ministry spokesperson Liane Fisher Bloxam says a ministry investigation determined the need to repair, clean and reseal joints of the problem concrete. There will also be “selective concrete panel repairs” as part of the project.

“Concrete pavements are constructed with joints filled with a rubberized sealant to allow the concrete to expand. Occasionally, under extremely high temperatures and humidity the expansion can be greater than that provided by the joints and the resulting force may cause the concrete to buckle,” said Fisher Bloxam, in a statement. “Buckling may also be exacerbated by sand or debris in the joint.”

The ministry says it works with its contractors to monitor and repair affected joints and pavement as quickly as possible.

But Town of Essex Deputy Mayor Richard Meloche says it's time for the province fix the road once and for all, before it causes a serious accident.

"They gave us some promises about number 3 highway and making it a safer route for our residents in the county,” Meloche says. “Well, fess up, common. Let's get going. Let's put something in place that makes it a better road than it is right now."