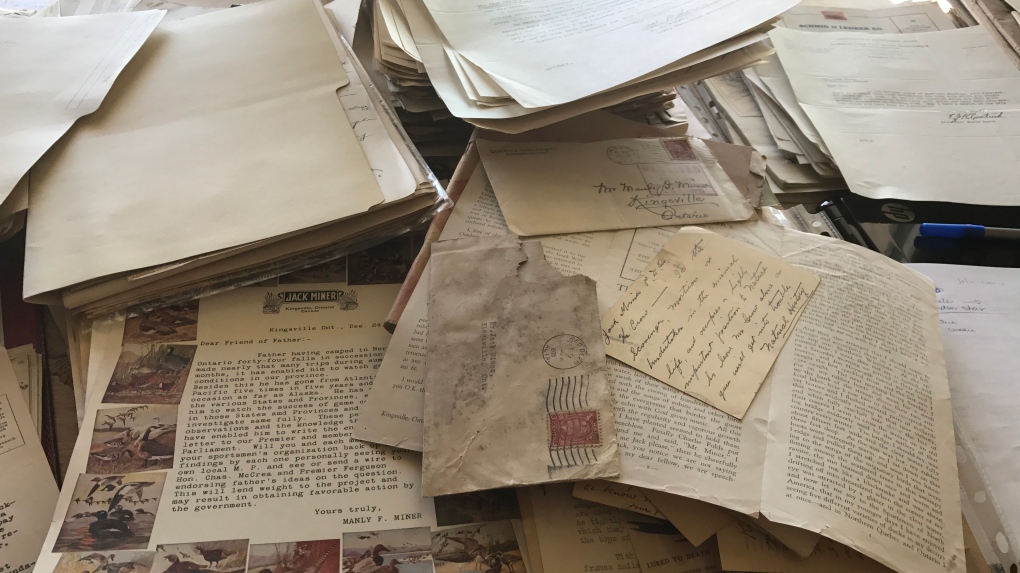 Stolen documents have been returned to the Jack Miner Sanctuary after they were purchased at a Kingsville yard sale for $20.

Baruth received a big surprise when the bag was opened.

“Her hands started to shake when she saw what was in the bag,” Matijasevic later told the OPP officer who came to the sanctuary.

Archives returned include handwritten letters and documents from 1920-1940, (many still in standard file folders) related to the issue of wolves and crows and their impact on migratory bird populations; the blue prints for the banding net still in use today; news articles and more.

Baruth says documents and artifacts had been unlawfully removed from the Sanctuary by the former director Kirk Miner several years ago, and the foundation had received a successful judgement against Miner regarding material sold to the Detroit Tigers in 2015, but that there was still a lot of material missing.

“I had to find a way to tell this nice gentleman that he was in possession of stolen property,” Baruth said.

Matijasevic, an avid stamp collector, had picked up the material at the yard sale looking for old stamps. He brought the bag, approximately 10 per cent of what he had at home, for verification by the executive director.

Baruth offered to reimburse Matijasevic the money he paid for the material but he declined. His reward “was doing the right thing.”

She gave him a real Jack Miner goose band and banded a Canada goose with Simeron’s name inscribed on the inside. He will also choose the bible verse for the 2018 commemorative bands later this year.

She says the Foundation is grateful to Matijasevic for his honesty in returning the items to where they may be used to continue to tell the story of Jack Miner.

Baruth reminds everyone that if they are in possession of artifacts or archival material that may have been given to them by the former director, volunteers or staff that they are indeed in possession of stolen goods and encourages them to return the items to the foundation offices.