WINDSOR, ONT. -- The start of back-to-school has been pushed back again in Windsor-Essex.

“We just want to make sure that we reduce that anxiety,” says Emelda Byrne, executive superintendent of student achievement with the Windor-Essex Catholic District School Board (WECDSB).

The first week back to school is going to look very different for elementary pupils.

Both big boards in the region are staggering the start days and won't begin welcoming students until Sept. 10.

In the Catholic system, pupils from Grades 1 to 3 will be at school on Thursday, while Grades 4 to 8 will go Friday.

Kindergarten pupils will be staggered further to start, beginning Sept. 14.

Board officials say breaking the students into smaller groups will help them learn about their new environment.

But union leaders are still not giving up their fight for reduced class sizes.

“They're having a hard time, reconciling the social distancing rules that we have been practicing for months, and they seem somehow, to be downplayed by this government now that we are supposed to be getting back to school, says Darryl Fanick, president of OECTA Windsor-Essex.

Both board are using Sept. 8 and 9 to prep the teachers and re-organize.

“I know it reflects the concerns that teachers have brought forward to the school board and although it is frustrating for parents and the community that there is another plan being put in place. You think it’s what’s best for the system, definitely what’s best for kids and teachers, says Mario Spagnuolo, president of the Greater Essex ETFO.

Schools are expected to notify parents and guardians of their child's group assignment and return to school schedule soon. 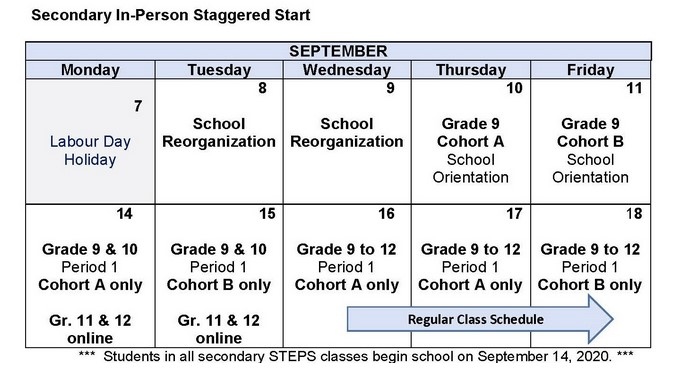 At the Windsor-Essex Catholic District School Board, students in will have a staggered start, based on grade.